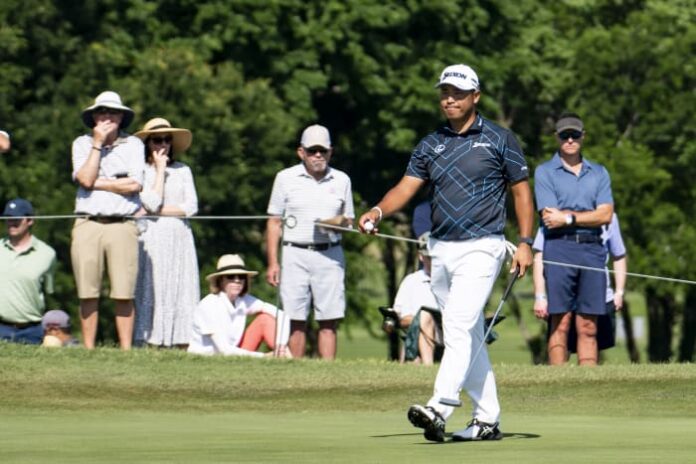 MCKINNEY, Texas – Sebastian Munoz shot a 12-under 60 in the opening round of the Byron Nelson on Thursday, following his only bogey with an impressive mid-round surge to become the first player in PGA Tour history with two rounds of 60 or better in the same season.

Munoz was at 2-under par a one-stroke penalty because of a wayward tee shot at the eighth hole. The 29-year-old Colombian, who lives in the Dallas area, then went 6-under in the next four holes. He made eagles at the par 5 No. 9 and No. 12 and sank 3-foot birdies in between.

In the middle of the fairway after his tee shot at the 18th hole, another par 5, Munoz missed the green to the right. But he made a nice flop shot and sank the round-ending 12-foot birdie.

Munoz also had a 60 in the opening round of the the RSM Classic at Seaside in Georgia in November, although that was a 10-under score. He went on to finish third.

TPC Craig Ranch, the second-year home of the Nelson, is about 30 miles north of downtown Dallas and 30 miles east of the University of North Texas, where Munoz went to school.

Munoz finished his round before two major winners from Dallas teed off in the afternoon in the same group, with a four-stroke lead over Mito Pereira and Peter Malnati among the earlier finishers.

Masters champion Scottie Scheffler, the No. 1 player in the world, made his first individual start since winning the Masters five weeks ago. Three-time major champion Jordan Spieth, ranked No. 9, played for the first time since his win at RBC Heritage the week after the Masters.

Scheffler and Spieth, who both played at the University of Texas, competed in their first PGA Tour events as teenagers at the Nelson.