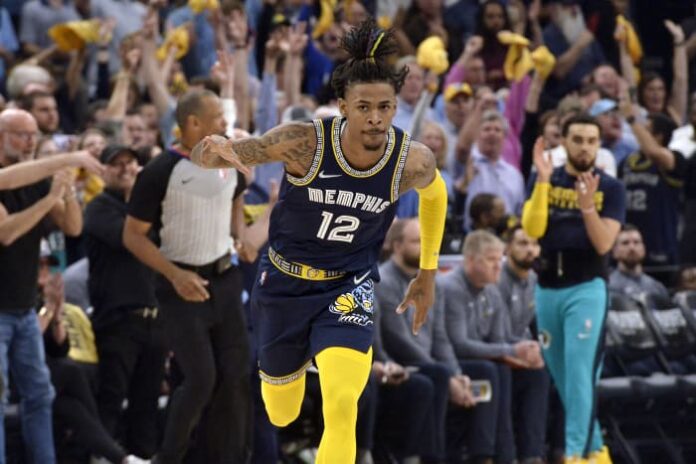 MEMPHIS, Tenn. – Ja Morant scored 47 points to match his postseason high and carry the Memphis Grizzlies into a tie in the Western Conference semifinals with a 106-101 victory over the Golden State Warriors on Tuesday night.

Morant scored the last 15 points for Memphis, starting with 4:16 left. He drove and turned around a defender before hitting a 7-foot jumper with 1:42 left to put Memphis ahead to stay at 100-99. He added four free throws and a 9-footer finishing with 18 in the fourth quarter.

The NBA’s Most Improved Player, who also had 47 in Game 2 against Utah last year, became only the third player in league history to have multiple 45-point games in the postseason before turning 23. The other two? LeBron James and Kobe Bryant.

Ziaire William hit four 3s and finished with 14 points off the bench. Jaren Jackson Jr. scored 12 points before fouling out for the third time in eight games this postseason. Brandon Clarke added 10 points.

Now the youngest team to reach the semifinal round in the last 25 years heads to San Francisco for Game 3 on Saturday night knowing the series will return to Memphis for Game 5.

The Warriors, in the semifinals for the seventh time in 10 years, had their chances. Trailing 104-101, Curry passed to Green, who tossed it to Thompson, who traveled with 17 seconds left. Morant hit two free throws for the final margin.

The Grizzlies are coming off the franchise’s first series win in seven years. But a team that was the NBA’s second-youngest squad during the regular season is trying to take Memphis past the second round, something this franchise has done only once back in 2013.

It didn’t get easier when Dillon Brooks, averaging 15 points this postseason and whose job was defending Curry, was ejected with 9:08 left in the first quarter after a hard foul on Warriors guard Gary Payton II. Payton went to the locker room for X-rays on his left elbow. He didn’t return.

Green, ejected from Game 1 for his own Flagrant 2, went down a couple minutes after Brooks’ ejection. He went to the locker room, flashing the middle digit on each hand at the fans. He returned for the second quarter after getting stitches for a cut at his right eye that was nearly swollen shut by halftime.

Memphis scored the first eight points of the game and led 33-25 after the hectic first quarter with Morant scoring 14, Jackson 10. Curry had 11 for Golden State with Brooks in the locker room. The second quarter got a bit sloppy at times with the Warriors going 2 of 11 outside the arc with five turnovers.

The Grizzlies led 56-51 at halftime with Morant scoring the final four points of the second for Memphis, giving him 23.

Curry and Poole fueled a big third quarter in Game 1 combining for 23 points. This time, Curry scored four points and Poole had six, but Golden State finished the third on a 13-3 run to tie it up at 77. Morant was hit in the face in the final seconds and went to the bench saying he couldn’t see out of his left eye.

Golden State took its first lead of the game within the opening minute of the fourth on a layup by Poole, and the Warriors led by as much as 81-77. Memphis answered with a 9-2 run capped by back-to-back 3s from Williams, who missed the last two playoff games with a sore right knee.

Warriors: Now are 39-34 in Game 2s and 18-9 since the 2015 playoffs. … Thompson needed only one 3 to reach 400 for his career in the playoffs. He knocked that down with 7:16 left in the first quarter. … They outrebounded Memphis matching their postseason high for a second straight game at 52-47.

Grizzlies: Morant snapped a streak of six straight double-doubles that made him the youngest in 30 years with that long a streak in one postseason. … Jackson tied Zach Randolph for third on the franchise’s career blocks list in the postseason with his 24th a minute into the third quarter. … They shot 14 of 45 from 3.

Michigan State coach Tom Izzo was at the game with three former Spartans in this game, including Warriors forward Draymond Green. Izzo posed for a photo before the game with Xavier Tillman Sr. and Jackson.