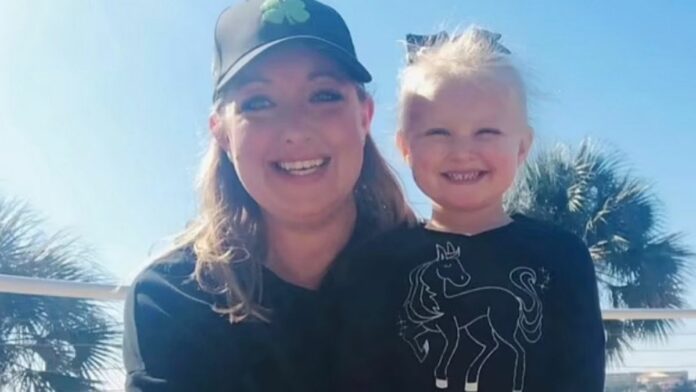 Cassie Carli’s remains were found near a barn in St Clair Alabama, Florida, in the US, and she was identified due to a tattoo. Her ex Marcus Spanevelo was arrested in a restaurant close to where she lived

The body of a missing mom has been found in a shallow grave four days after she disappeared while collecting her four-year-old daughter.

Cassie Carli’s remains were found near a barn in St Clair Alabama, Florida, in the US, and she was identified due to tattoo.

The 37-year-old went to pick up her daughter Saylor last Saturday, a sheriff has said.

Her ex Marcus Spanevelo was arrested in a restaurant close to where Carli lived after her disappearance.

Sheriff Johnson told journalists at a news conference: “Cassie Carli who’s been missing now for about a week, we discovered her body while executing a search warrant out in Alabama.

“It was in a barn, in a shallow grave, so it’s not the ending that we wanted, obviously. But we’re hoping to provide a little closure for the family.”

Johnson said Spanevelo had “absolutely not” been cooperative following his arrest over Carli’s disappearance Saturday.

He tore into the suspect, with Johnson saying he hopes Spanevelo is executed for the crime.

He said: “He was totally uncooperative with us and that goes a long way.

“It’s your baby’s mother who’s missing and you’re not going to cooperate with authorities, it’s kind of telltale.

“We hated that Cassie has passed away, but it’s good to get closure for the family. Johnson said. It’s good to keep this dirtbag in jail, where he belongs.

“I think we have a great case and I think he’s either going to spend the rest of his life in jail or get the needle. Hopefully the needle.”

The sheriff refused to say how they’d learned where Carli had been buried but added that the barn had a peripheral connection to Spanevelo.

Spanevelo was arrested in Tennessee and is currently being held there on charges of evidence tampering and giving false information pending an extradition hearing.

Sheriff Johnson says he expects those charges to be upgraded following Monday’s autopsy.

Concerned family members raised the alarm after they could not get in touch with Carli last week, with police further disturbed on discovering Carli’s car in the restaurant lot, with her purse still inside.

Saylor was found safe and well with her dad in Birmingham, Alabama, on Wednesday.

Cassie Carli’s remains were found near a barn in St Clair Alabama, Florida

Spanevelo, 34, was arrested in Lebanon, Tennessee, around 10 am on Saturday and has been charged with tampering with evidence, giving false information concerning a missing person investigation, and destruction of evidence.

“We are cautious as to the information being released due to the sensitivity of this case.”

Carli’s sister Raeann posted a video on Facebook reacting to the arrest, saying: “We are a little relieved to know that Marcus is in custody, and we’re hoping that can bring us some more answers and closer to finding Cassie.

“Like I said, now that he’s in custody, hopefully, we can get a few more answers on her disappearance. We’re going to bring Cassie home.”

She also said the “search is on tomorrow” as the family continues to look for the mother-of-one.

The Maury County Sheriff’s Office in Tennessee said the father has been booked into jail.

Carli’s car was located on Tuesday in Navarre with her purse inside, raising concerns for her well-being, Santa Rosa County Sheriff Bob Johnson said during a press conference on Thursday, adding that there has been no activity on the missing woman’s phone or credit card since Sunday.

Carli had arranged to meet up with Spanevelo to exchange custody of their daughter at around 7 p.m. in the parking lot of Juanita’s Grill at Navarre Beach.

Carli’s friend Sam Graves, who organised a search party in Navarre on Tuesday, told WEAR-TV that Saylor’s father, whom she identified as Spanevelo, falsely claimed that he had brought Cassie to Graves’ house after she “freaked out” on Sunday.

Graves said that Spenevelo is a Brazilian national and that he previously threatened to take Saylor out of the country.