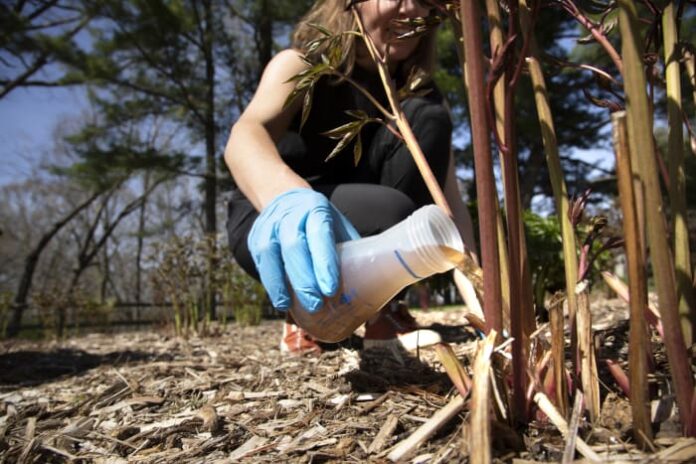 ANN ARBOR, Mich. – A pair of University of Michigan researchers are putting the “pee” in peony.

Rather, they’re putting pee ON peonies.

Environmental engineering professors Nancy Love and Krista Wigginton are regular visitors to the Ann Arbor school’s Nichols Arboretum, where they have been applying urine-based fertilizer to the heirloom peony beds ahead of the flowers’ annual spring bloom.

It’s all part of an effort to educate the public about their research showing that applying fertilizer derived from nutrient-rich urine could have environmental and economic benefits.

“At first, we thought people might be hesitant. You know, this might be weird. But we’ve really experienced very little of that attitude,” Wigginton said. “In general, people think it’s funny at first, but then they understand why we’re doing it and they support it.”

Love is co-author of a study published in the Environmental Science & Technology journal that found urine diversion and recycling led to significant reductions in greenhouse gas emissions and energy.

Urine contains essential nutrients such as nitrogen, potassium and phosphorus and has been used as a crop fertilizer for thousands of years.

Love said collecting human urine and using it to create renewable fertilizers — as part of what she calls the “circular economy of nutrients” — will lead to greater environmental sustainability.

Think of it not so much as recycling, but “pee-cycling,” Wigginton said.

“We were looking for terms that would catch on but get the idea across, and ‘pee-cycling’ seems to be one that stuck,” she said.

As part of a $3 million grant from the National Science Foundation awarded in 2016, Love and Wigginton have not only been testing advanced urine-treatment methods, but also investigating people’s attitudes about the use of urine-derived fertilizers.

That is what brought them to the much-loved campus Peony Garden, which contains more than 270 historic cultivated varieties from the 19th and early 20th centuries representing American, Canadian and European peonies of the era. The garden holds nearly 800 peonies when filled and up to 10,000 flowers at peak bloom.

Love and Wigginton plan to spend weekends in May and June chatting up visitors. One important lesson they learned is about the precision of language.

“We have used the term, ‘pee on the peonies.’ And then it grabs people’s attention and then we can talk to them about nutrient flows and nutrient efficiency in our communities and how to be more sustainable,” Love said. “It turns out some people thought that that was permission to drop their drawers and pee on the peonies.

“So, this year, we’re going to use ‘pee for the peonies’ and hope that we don’t have that confusion.”

The urine-derived fertilizer the researchers are using these days originated in Vermont. But if all goes according to plan, they’ll be doling out some locally sourced fertilizer next year.

A split-bowl toilet in a campus engineering building is designed to send solid waste to a treatment plant while routing urine to a holding tank downstairs. Urine diverted from the toilet and urinal were to be treated and eventually used to create fertilizers, but the COVID-19 pandemic forced the school to shut down the collection efforts.

In the meantime, the facility is undergoing an upgrade to its freeze concentrator and adding a new, more energy-efficient pasteurizer, both developed by the Vermont-based Rich Earth Institute.

“The whole idea is cycling within a community, so moving toward that we want to take urine from this community and apply it within this community,” Wigginton said.