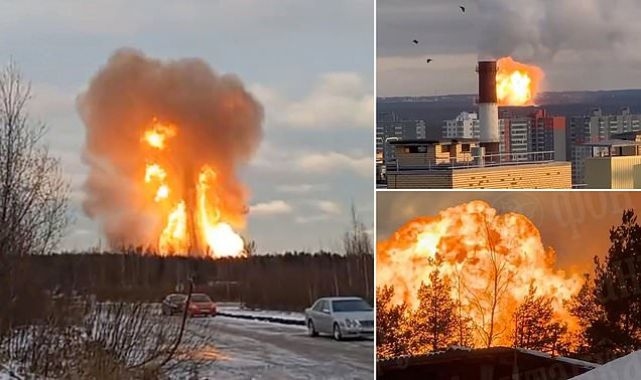 An enormous explosion has hit one of Russia’s major gas pipelines, sending flames and smoke billowing into the sky above and prompting fears it was a retribution attack for Vladimir Putin’s continued invasion of Ukraine.

The fireball was visible for miles in every direction after hitting about 14 miles east of St Petersburg, the nation’s second largest city and Putin’s hometown.

One source said: ‘Everything is automatic there, and such explosions by themselves, without external influence, are impossible.’

The blast is believed to have hit the main gas pipeline belonging to Gazprom Transgaz SPB, and could have potentially impacted up to one million people.

Ambulances and emergency vehicles were rushing to the scene this afternoon. Eyewitnesses reported intensive care vehicles also drove to the site of the explosion.

It’s understood investigators and forensic specialists were also at the site of the explosion as they rush to determine the cause.

However, the major blast did not hit close to residential areas, and there are no initial reports of casualties coming out of Russia.

One working theory is that the explosion may have been linked to the war in Ukraine.

Russia has deliberately targeted Ukraine’s vital energy supply lines in recent attacks which have been condemned around the world and left millions of Ukrainians freezing as winter approaches.

And yesterday, a Swedish prosecutor said sabotage was behind the Nord Stream pipeline blasts of September 26, sparking fears this explosion may have been caused by people sympathetic with the plight of Ukraine.

At the site of the Russian blast today, local power supplies have been switched to using oil in an attempt to ensure domestic heating remains available in the region.

The blast caused disruption to the Severnaya Thermal Power Plant, which heats hundreds of thousands of homes at a time when temperatures are around minus 5C.

The plant provides electrical and thermal energy to factories, residential areas and public buildings in the northern part of the Vyborgsky and Kalininsky districts of St. Petersburg, as well as the settlements of Novoe Devyatkino and Murino, and the Vsevolozhsky district of the Leningrad region.

In total more than 800,000 people receive heat from the Severnaya plant.

‘Firefighters and rescuers are extinguishing a fire caused by an explosion on a gas pipeline between Berngardovka and Kovalevo,’ Leningrad region governor Alexander Drozdenko, a Vladimir Putin ally, said.

‘There is no threat to the population and the spread of fire to residential areas. The causes of the explosion are being established.’

The impacted region has pipelines which in normal times supply Europe, passing through Leningrad regions. However, Russia has limited its gas supplies due to the war in Ukraine.

A local resident said: ‘Something is on fire in Bernhardovka. The rumble sounds like it is a fighter jet.

Another said: ‘We heard and felt a massive sound of explosion.’

A third reported: ‘A gas pipe exploded in the forest. Our house shook, we thought it was a bomb, and the war, had come here.’

On Friday, Swedish and Danish authorities investigating four holes in the Nord Stream 1 and 2 pipelines which link Russia and Germany via the Baltic Sea, said traces of explosives were found at the sites.

Denmark last month said a preliminary investigation had shown that the leaks were caused by powerful explosions.

‘Analysis that has now been carried out shows traces of explosives on several of the objects that were recovered,’ prosecutor Mats Ljungqvist who is leading the preliminary investigation said in a statement.

‘The investigation is highly complex and comprehensive. The ongoing probe will determine whether any suspects can be identified,’ he added.

Seismologists in Denmark and Sweden have previously said they had registered tremors in the immediate vicinity of the leaks and that the signals did not resemble those from earthquakes.

The September 26 ruptures of the seabed pipelines, spewing gas into the ocean that bubbled to the surface in the week that followed, triggered warnings of public hazard and fears of environmental damage.

Although the pipelines were not in operation at the time of the damage, they contained gas before falling victim to the apparent sabotage.

A section measuring at least 164 feet is missing from Nord Stream 1, Swedish daily Expressen reported on October 18 after filming what it said were the first publicly released images of the damage.