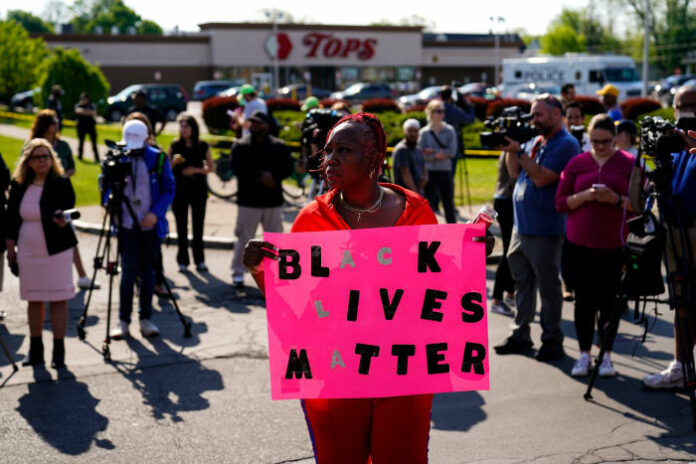 JACKSONVILLE, Fla. – A white 18-year-old man is accused of driving to a predominately Black neighborhood and opening fire at a supermarket in Buffalo, New York.

The U.S. Department of Justice is investigating the mass shooting as a hate crime.

A total of 13 people, 11 Black and two white, were shot at the Buffalo supermarket Saturday afternoon. Ten of them died. The accused shooter, Payton Gendron, is believed to have traveled 200 miles to the neighborhood where he opened fire.

News4JAX spoke with Civil Rights attorney Reganel Reeves who is not affiliated with this case.

Gendron appeared in court Saturday where he was arraigned on first-degree murder.

Detectives said he wore tactical gear and body armor as he live-streamed the rampage on the social media platform Twitch before surrendering to authorities.

His semi-automatic gun had the “N-word” written on the barrel and the number 14, a known white supremacist slogan, according to officials. Before the mass shooting, investigators believe Gendron posted a 180-page manifesto on the internet detailing a plan for an attack and his support for several mass murderers.

“He gave it to them on a silver platter that this shooting was motivated by race. He literally put online a manifesto, outlining his ideologies and white supremacy and anti-Semitic ideology,” said Reeves.

A government official confirmed to the Buffalo News that Gendron was accused of planning a shooting at his high school last year.

“Once you’re charged (in a federal case), you’re pretty much guaranteed to be convicted of it. It’s about 95 percent conviction rate,” Reeves said.

Gendron has not been formally charged with a federal hate crime at this time, but the U.S. Department of Justice is investigating.

If convicted of first-degree murder, he could face a maximum life sentence without parole.