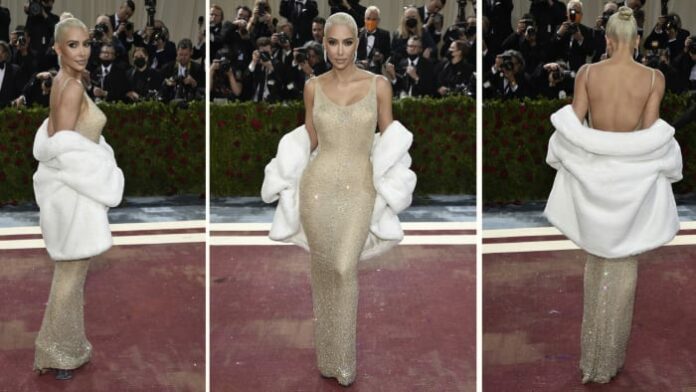 Kim Kardashian is known for breaking the internet, and she did it once again at the Met Gala on Monday night when she donned the iconic dress that Marilyn Monroe wore in 1962 as she famously sang “Happy Birthday” to President John F. Kennedy.

Meyer helped buy the dress for Ripley’s and said the sky-high price was worth it.

“It means a great deal to our company to own it, to have it here in historic St. Augustine, which is our original, very first Ripley’s museum,” he said. “It’s a bit of history.”

The gown, which was designed by Jean Louis and features thousands of handstitched crystals, made a stop at the Northeast Florida Ripley’s as part of the museum’s “Monroe-JFK” exhibit.

The dress moved onto other Ripley’s museums and eventually made its way back to a secure vault in Orlando. To this day, according to Vogue, it holds the record for being the most expensive dress sold at auction.

This year, the Met Gala returned to its berth on the first Monday in May after years of pandemic upheaval. The celebration of American design was themed to gilded glamour. Kardashian told Vogue that the most American thing she could think of was Monroe.

“For me, the most Marilyn Monroe moment is when she sang ‘Happy Birthday,’ to JFK. It was that look,” the reality TV star and entrepreneur said.

According to Vogue, the piece is stored in a darkened vault that’s controlled at the optimum 68 degrees and 40-50% humidity, and before Ripley’s would agree to loan Kardashian the piece, she was invited to try on a replica, which fit perfectly. Soon after, the original dress was flown on a private plane from Orlando to Kardashian’s home in Calabasas, California. She said it was transported by guards and she had to wear gloves to try it on, but that time, the dress didn’t fit.

“So when it didn’t fit me I wanted to cry because it can’t be altered at all,” she said.

Kardashian reportedly had to lose 16 pounds to fit into the dress.

“It was such a challenge,” she said. “I was determined to fit it.”

On Monday evening, Kardashian, with boyfriend Pete Davidson at her side, paired the dress with Cartier white gold drop diamond earrings and a furry white jacket. Her hair was platinum, emulating Monroe, and pulled tightly into a bun. But she only wore the fragile original dress for her walk up the Grand Staircase at the Metropolitan Museum of Art, changing into a replica after that, according to Vogue.