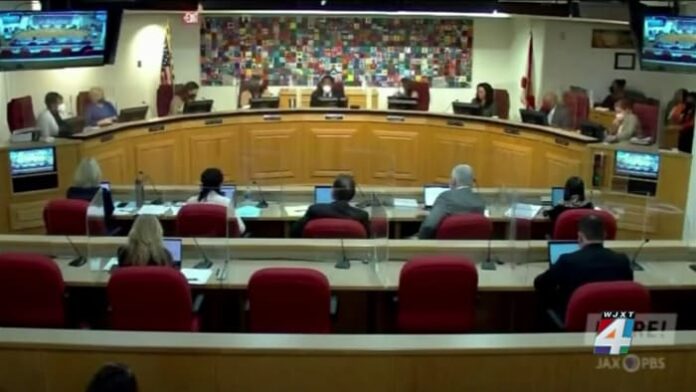 Nearly 300 people filled out a blue notecard in the Duval County Public Schools administrative building Tuesday, adding their names to the list of speakers that would address the school board directly at the meeting that night.

At the heart of all that interest was a resolution, brought by board member Charlotte Joyce, that would celebrate the controversial “Parental Rights in Education” law, which critics call Florida’s “Don’t Say Gay” policy.

Though a decision on the resolution was ultimately shelved by the board, some have floated the idea of updating the board’s policy governing public comments at board meetings after that section extended Tuesday night’s meeting until just before 2 a.m.

After last night’s marathon @DuvalSchools meeting, I thought it would be relevant to address several questions by posting this section of the district’s board policy. These are THE TEN COMMANDMENTS for public comment at DCPS board meetings. #News4JAX

Would YOU change anything? pic.twitter.com/3nn2vkuiAE

The board’s policy requires a meeting not run past 11 p.m. unless a majority of the board votes to extend it. That vote was taken shortly before 11 p.m., allowing the meeting to continue.

On Wednesday, board chairman Darryl Willie told News4JAX that public comments are a fundamental part of the board’s responsibility and operation.

“At the end of the day, we are an elected body,” Willie said. “We got elected by constituents. Once you’re on the board, you represent everyone.”

Several ideas for possible alterations to the board’s policy on public comments were floated when board members were deliberating whether to extend Tuesday night’s meeting past 11 p.m. including a decrease of the 3-minute time limit that members of the public are allowed to fill.

That idea was rejected, as that rule is enshrined in board policy.

“I think we’ll definitely look into it and look at all the different opportunities and options that we have to make it make it more efficient, efficient and effective,” Willie said of board meetings. “I think it’s a balance. We want to make sure we hear from the public, but also are able to actually get to the business of why we’re there.”

Notably, if the board decides to alter its policy on public comments at its meetings, that change would, itself, be subject to public comment.