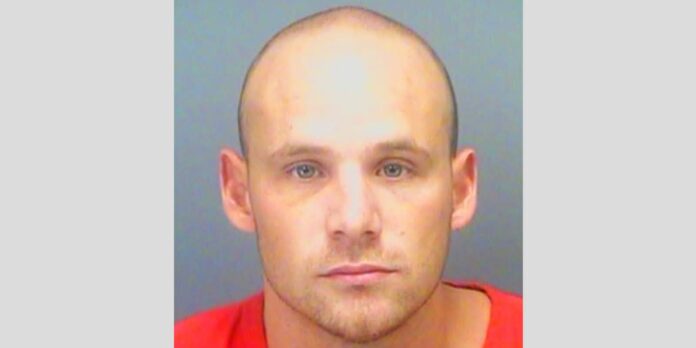 A judge sentenced a man to two years in prison on Monday for harassing and sideswiping a Black driver on a Florida roadway. Jordan Patrick Leahy, 29, must also spend three years on supervised release, online records show.

As previously reported, the victim, a Black man identified in court documents s J.T., was driving with his girlfriend and his daughter in the car on Aug. 8, 2021. Authorities said another driver, Leahy, tailgated, swerved at, and collided with the victim’s vehicle. Leahy, who is white, yelled the N-word at J.T. and his family.

Simply put, the defendant was motivated by hate. From prosecutors’ sentencing memorandum:

After being arrested by law enforcement, and while waiting to be transported in the back of a patrol vehicle, the defendant was asked about the incident. He responded, “I just remember throwing up the Nazi salute and trying to pick a fight with some random-ass fucking colored people, bro, that’s all I remember.” Here, the defendant plainly sums up his motives. Just as the jury found and the evidence at trial established, the defendant intentionally selected J.T. because he was black.

Leahy’s problem was he just got choked out for his trouble. As previously reported, authorities said that J.T. followed Leahy in an attempt to take a picture of the defendant’s license plate. Leahy, however, stepped out of his vehicle and escalated the confrontation. J.T. told his girlfriend to call the police; he stepped out of his vehicle to protect his family, authorities said.

J.T. then got out of his car, intending to draw any fire away from J.T.’s girlfriend and daughter. The two met beside Leahy’s car. When they did, Leahy was the aggressor: saying something to the effect of, “Fuck you, [N-word],” Leahy tried to strike J.T. with a closed fist. J.T., a martial artist, slipped Leahy’s blow and punched Leahy twice. J.T. then caught Leahy in a chokehold until Leahy briefly passed out, and restrained Leahy until Pinellas County deputies arrived.

In seeking a sentence as low as four months, Leahy’s defense argued that he was not actually racist. For example, he “supported black public figures like football players and President Obama.” The defense maintains he only began to express racist language after going to prison.

“After a relationship gone wrong, Jordan went to prison for stalking his ex-girlfriend,” documents stated. “There, he found the inmates sorting themselves by race, and found himself doing the same for self-preservation. His family reports that his first use of racist language was after his return from prison.””

They maintained that his use of racist language was just for shock value.

“His mother explained to the FBI that Jordan’s use of racist language after prison was a new way to shock people,” documents stated. “[Kermit Beckwith, the former boyfriend of his maternal grandmother] agreed that Jordan harbors no actual racial animosity even though he has used racist language, and Kermit’s wife agreed that his use of racist language stemmed not from actual racial animus but rather is ‘a way to try [to] assert himself,’ because he “lacks overall confidence and may have been trying to establish himself.”

Ex-girlfriend Gabriella Bolt testified that he would drive erratically to shock people.

“He would tail people and like try to crash into their bumper or open up the door and try to tap the side mirror and then close his door back up and then he would come over and start bragging about it,” she said.

Prosecutors did not concede to any of that. They maintained that Leahy was being racist. Not only that, he meant to do more than just scare J.T.

As the defendant was being transported from the scene, he made a series of statements reflecting his desire to kill or harm others, all of which were captured on the patrol vehicle’s camera. … For example, the defendant asked, “Do you know how bad I want to kill people?” The defendant made his intention even more explicit that evening when he explained what he intended to do to a responding officer. Specifically, the defendant stated that he was “trying to pick a fight with some random-ass fucking colored people.” Considering the defendant’s actions and statements in conjunction, it is clear that his conduct was not done to merely to frighten J.T.

“Today’s sentence sends a clear message that racially-motivated criminal behavior is especially repugnant and unacceptable,” said U.S. Attorney Roger Handberg of the Middle District of Florida. “We will continue to work with our local, state and federal law enforcement partners to enforce our nation’s civil rights laws.”