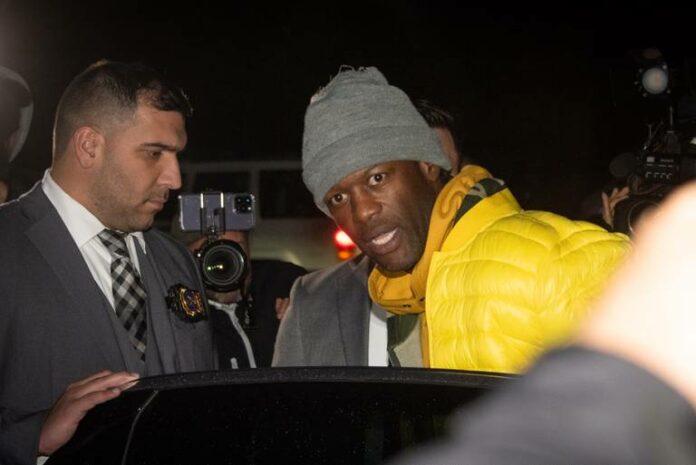 A man with 20 prior arrests was nabbed Monday for randomly shoving a man to the tracks in a Brooklyn subway station, police said.

Police said they used facial recognition to track down McRae — who was once arrested for shooting a person — near his home in Bushwick, Brooklyn.

The attacker ran at David Martin, 32, as the victim stood on a Manhattan-bound L train platform at the Myrtle-Wyckoff station in Bushwick around 2:40 p.m. Friday, surveillance video released by the NYPD shows.

Martin was catapulted onto the tracks as a group of children watched in horror.

Good Samaritans pulled the injured man off the tracks before a train could come into contact with him.

Martin broke his collarbone in the attack, leaving him unable to work for at least six weeks at his serving job on the Upper East Side, his sister told the Daily News.

“In the blink of an eye, I was pushed with full force into the train tracks,” Martin told WABC-TV. “People were told that I had no injuries, but I am laying in bed with a broken collarbone and my face is so swollen. And mentally, I don’t know how to even get through this.”

Martin said he no longer feels safe on the train.

“Because I’m from New York… I’ve always felt safe taking the train, and now at 32 years old I no longer feel safe and that’s not fair and that’s not OK,” Martin told the station.

The victim’s family is trying to help him get through the ordeal, but relatives said it is hard on them, too.

“Thank God he’s alive,” said his mother, Audrey Martin. “The trauma is overwhelming — like, how can you wrap your head around a random person doing that, and why me?”

She said her son is suffering from extreme anxiety over the attack.

“He started smoking cigarettes again, which he’s not supposed to do,” she said. “I don’t know how he’s going to live like this. Every time I mention getting a lawyer or something, he gets freaked out. He’s very freaked out. He has a lot of anxiety.”

She said her son has been rewatching the video.

“It’s too traumatic,” she said. “It’s like, ‘Why me out of everyone on the platform?’ It’s a constant play-over of what happened.”

As of Oct. 16, subway crime this year is up 41%, according to NYPD stats. Felony assaults have increased 17%, with 431 attacks so far this year compared to 370 by the same time last year.

Of the 174 people arrested for felony assault in the transit system so far this year, 42.5% of them have histories of mental illness, sources said.

There have been 421 people arrested for major crimes like murder, rape, robbery, felony assault, burglary, grand larceny and car theft. Out of those people taken into police custody, 38.7% have a history of mental illness.