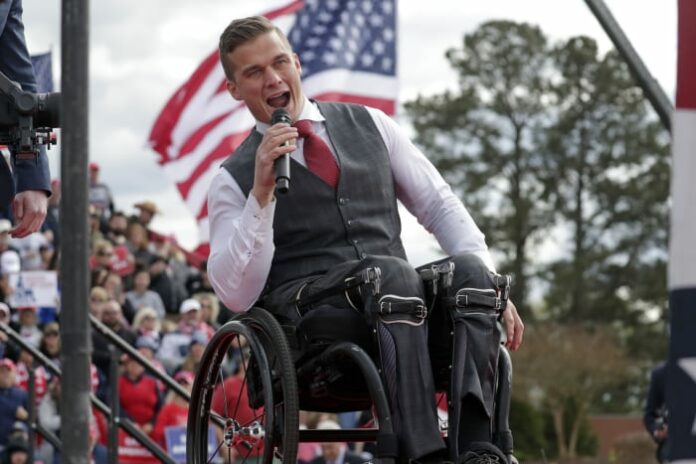 RALEIGH, N.C. – U.S. Rep. Madison Cawthorn’s prominent role as the youngest pro-Donald Trump agitator in Congress can rub people on the right and the left the wrong way in his North Carolina district.

That’s made the 26-year-old culture warrior a social media political celebrity and successful fundraiser. He’s near the top of the list of the former president’s most vocal allies on Capitol Hill.

But at home, the most consequential may have been when he decided to run for a different U.S. House seat, only to return to the mountainous 11th Congressional District that he now represents when redistricting litigation shifted the lines again.

The two top Republican leaders in the General Assembly have thrown their support to a Cawthorn rival — state Sen. Chuck Edwards, one of seven challengers in the May 17 primary. With Trump winning North Carolina twice and endorsing Cawthorn this year, his reelection in a Republican-leaning seat in a strong GOP year would have seemed likely.

Now, after just one term in office, the upstart congressman faces a tough primary challenge, with a difficult general election fight if he survives.

“I don’t know what has happened to him, but I do know this: The people of western North Carolina have not been represented in Washington, D.C.,” said Michele Woodhouse, who was once a Cawthorn ally but is now running against him.

U.S. Sen. Thom Tillis, R-N.C., endorsed Edwards in the race in late March, saying, “Cawthorn has fallen well short of the most basic standards western North Carolina expects from their representatives.” A super PAC aligned with Tillis is taking the unusual action of spending $1.5 million in the district on mailers and TV ads, one of which calls Cawthorn a “reckless embarassment” and ”dishonest disaster.”

Cawthorn is fighting back, accusing the Washington establishment and Tillis of trying to shut him down.

“I have never folded in Washington and the swamp hates me for it,” he says in an ad. “They want someone who will make backroom deals to sell out our values and someone who will abandon America First principles.”

The 11th District field became crowded with well-known or well-funded challengers after Cawthorn decided in the fall to run in another district closer to Charlotte under boundaries retooled during redistricting that would have made his path to reelection much easier.

But the statewide House map was struck down by state courts, and its reshaping ultimately forced Cawthorn in late February to return to what is largely the 11th District he currently represents. Meanwhile, Edwards, Woodhouse and other Republicans had been running there for months.

“It’s clear that his interest was to move somewhere else and seek a political career someplace else after we, including myself in this district, worked to get him elected,” Edwards said in an interview. “He turned his back on us.”

Cawthorn’s campaign said he wasn’t available for an interview. Campaign spokesperson Luke Ball wrote in an email that the congressman is “focused on moving forward, uniting the NC-11 GOP, and winning the November election, not relitigating the redistricting process.”

He’s been stopped by police three times since October — two in which he was cited for speeding and one for driving with a revoked license. He’s been caught with guns at airport checkpoints twice in the past year, including two weeks ago. He called Ukrainian President Volodymyr Zelenskyy a “thug” after Russia invaded the country.

In a nearly eight-minute video posted on social media last week, Cawthorn apologized for speeding and acknowledged that carrying a gun through airport security was a mistake: “I have to own this one.”

But he pushed back against other allegations made in news articles, calling them “outlandish.” And he later described two videos depicting him in sexually suggestive poses as part of a “drip campaign” by his enemies to flood the district with negative stories in the race’s final days.

“I was being crass with a friend, trying to be funny,” he tweeted about one video. “We were acting foolish, and joking, that’s it. I’m NOT backing down.”

In 2020, many conservatives saw Cawthorn as a rising star who could bring young people into the party. He turned 25 — the constitutionally mandated minimum age to serve in the House — during the campaign.

Cawthorn, who uses a wheelchair after being partially paralyzed from a car accident as a teenager, vaulted to prominence by winning a primary runoff for the seat being vacated by Mark Meadows, Trump’s chief of staff. Both Meadows and Trump had endorsed Cawthorn’s primary rival, but the former president soon became an ally.

“I love him because he’s never controversial,” Trump joked at a rally last month with Cawthorn. “There’s no controversy. But you know what? He loves this country. He loves this state and I’ll tell you, he is respected all over the place. He’s got a big voice.”

Some constituents believe he’s more interested in inflaming the culture wars or striking a pose on Instagram than helping the district.

Dairy farmer Bradley Johnston, 59, an unaffiliated voter from Henderson County, said Cawthorn seemed like a “smart young man” who “we all thought would go to Washington and represent the values that we liked.”

“He just, in my opinion, has not conducted himself in the ways that he’s going to be able to be much of a representative down the road,” Johnston said. Registered independents can vote in the GOP primary, and Johnston is supporting hotel operator Bruce O’Connell.

Early in-person voting ends Saturday. If the top vote-getter after Tuesday doesn’t receive more than 30% of the votes cast, the two leading candidates will go to a July runoff. In the six-candidate Democratic primary, minister and LGBTQ activist Jasmine Beach-Ferrara has been the top fundraiser.

Even if Cawthorn wins the primary, he’s not yet fully avoided a formal challenge of his candidacy by voters who say he should be disqualified over his involvement in the “Stop the Steal” rally that preceded the Jan. 6 Capitol insurrection.

Cawthorn got a federal judge to block the state board of elections from examining the challenge. That ruling is on appeal.

While the 11th District, which stretches 160 miles from east of Asheville to the north Georgia border, is a haven for retirees, it could be new voters who decide the race.

“Madison is a very flashy person and a character himself,” said Brian Penland, 22, of Franklin, a Western Carolina University student who declined to give his preference in the race. “Whether people like him or not … he is here and he has made his stamp in western North Carolina. And the rest of it is up to the voters.”