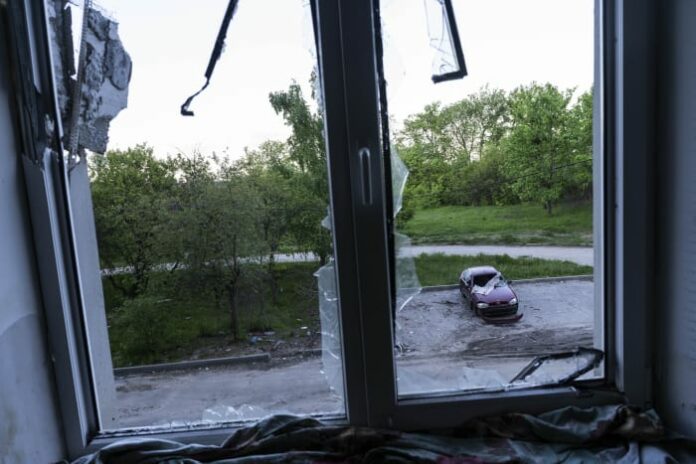 KYIV, Ukraine — Russian forces focused their latest attacks in Ukraine on the Donetsk region in the east, targeting civilian and military sites in multiple towns, the Ukrainian military said Monday.

The general staff of Ukraine’s armed forces said Russia’s military also continued air and artillery strikes around the Azovstal plant in Mariupol, the last holdout of Ukrainian forces in the strategic city.

In the Donetsk region, it said Russian forces used a range of weaponry on Ukrainian military fortifications and units and fired artillery at civilian infrastructure in the towns of Dovhenke, Ruski Tyshki, Ternova and Petrivka.

Around Ukraine’s second-largest city Kharkiv, Russian forces are now concentrating on “maintaining positions and preventing the advance of our troops toward the border.” Ukraine’s military posted a video Sunday night showing its troops at the border in the Kharkiv region.

The Ukrainian daily note did not detail specific gains or losses. It is very difficult to get a clear overall picture of fighting in the east because of tight travel restrictions imposed by both sides and the danger of frequent air and artillery strikes around the region.

— Follow all AP stories on Russia’s war on Ukraine at https://apnews.com/hub/russia-ukraine

LONDON — British military authorities say the presence of Belarusian forces on the border may force Ukrainian troops to stay in the area instead of going to support operations in the eastern Donbas region.

Belarus, a close ally of Russia, said last week that it planned to send special operations troops to three areas near the Ukrainian border as it complained about the buildup of NATO troops in the region. The U.K. Ministry of Defense, in an intelligence briefing released Monday, said Belarus has also deployed air defense forces, artillery and missile units to training sites in western Belarus.

The ministry says Belarusian forces haven’t been directly involved in the invasion of Ukraine, though Belarus was used as a staging area for Russian attacks on the cities of Kyiv and Chernihiv. Russia has also launched aircraft and missiles from Belarusian territory.