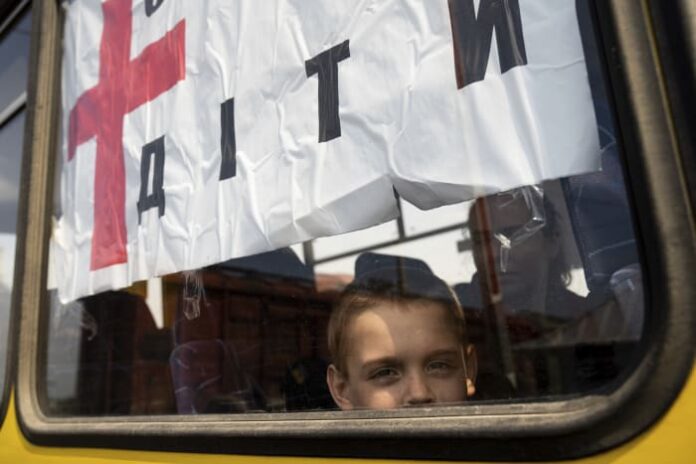 KYIV, Ukraine — Ukraine’s military says Russian forces are continuing airstrikes on the Azovstal steelworks in Mariupol and pressing their advance on towns in eastern Ukraine.

In its operational statement for Day 78 of the war, the Ukrainian military’s General Staff says Russian forces have also fired artillery and grenade launchers at Ukrainian troops in the direction of Zaporizhzhia, which has been a refuge for civilians fleeing Mariupol.

It did not elaborate on the latest action around Azovstal.

The military says Russian forces also fired artillery at Ukrainian units north of the city of Kharkiv in the northeast, and reported Russian strikes in the Chernihiv and Sumy regions to the north.

Across the Donetsk and Luhansk regions of eastern Ukraine, site of sustained fighting since the war began, the Ukrainian military noted “partial success” in Russia’s advance. It said Ukrainian forces repulsed nine Russian attacks and destroyed several drones and military vehicles. The information could not be independently verified.

— Quick Senate OK ahead for House-passed $40B aid for Ukraine

— Wives of Mariupol defenders to pope: ‘You are our last hope’

— Wartime birth amid the air raid sirens in Ukraine hospital

— Follow all AP stories on Russia’s war on Ukraine at https://apnews.com/hub/russia-ukraine

KYIV, Ukraine — An adviser to the Mariupol mayor said Wednesday that Russian forces have blocked all evacuation routes out of the city.

The adviser, Petro Andriushchenko, said there were few apartment buildings fit to live in after the weeks of bombardment and very little food or drinking water.

Andriushchenko said some residents who have remained in the city are cooperating with the Russian occupying forces in exchange for food.

Meanwhile, Ukrainian Deputy Prime Minister Iryna Vereshchuk says Ukraine has offered to release Russian prisoners of war if Russia will allow the badly injured fighters to be evacuated from the Mariupol steel plant.

Russian forces have surrounded the plant, the last bastion of Ukrainian resistance in the southern port city.

Vereshchuk said no agreement has been reached but negotiations were underway. The fighters trapped in the plant have refused to surrender to the Russians, saying they fear being tortured or killed.

WASHINGTON — U.S. Commerce Secretary Gina Raimondo said a ban on sales of semiconductors and other technology to Russia by the U.S. and its allies is having a serious impact on Russia’s ability to manufacture military equipment.

“We have reports from Ukrainians that when they find Russian equipment, military equipment, on the ground, it’s filled with semiconductors that they took out of dishwashers and refrigerators,” Raimondo said Wednesday during a Senate hearing, adding that she met a few weeks ago with Ukraine’s prime minister.

Raimondo said two of Russia’s tank manufacturing plants have shut and many of its auto makers have furloughed workers and closed down.

Raimondo said U.S. exports of technology to Russia are down nearly 70% since late February when the Biden administration, in coordination with European and Asian allies, imposed sanctions and export controls on Russia in response to its invasion of Ukraine.

WASHINGTON — Final congressional approval of a $40 billion Ukraine aid bill seems certain within days, according to some lawmakers.

The Senate’s top Republicans said Wednesday they expect strong GOP backing for the House-passed measure. That will signal a bipartisan, heightened commitment to helping thwart the bloody Russian invasion.

In his nightly video address Wednesday, Ukrainian President Volodymyr Zelenskyy said funds from the aid bill will allow Ukraine to get more weapons and equipment plus help investigate war crimes by Russia.

The bill also would help regional allies, replenish weapons the Pentagon has shipped overseas and provide $5 billion to address global food shortages caused by the war’s crippling of Ukraine’s normally robust production of many crops.

The new measure includes $6 billion to arm and train Ukrainian forces, $8.7 billion to restore American stores of weapons shipped to Ukraine and $3.9 billion for U.S. forces deployed to the area.

There’s also $8.8 billion in economic support for Ukraine, $4 billion to help Ukraine and allies finance arms and equipment purchases and $900 million for housing, education and other help for Ukrainian refugees in the U.S.

BERLIN — The U.N. nuclear agency says it is again receiving remote data from the Chernobyl power plant in Ukraine following an interruption caused by the Russian occupation of the site.

The International Atomic Energy Agency said late Wednesday that data transmission was re-established following a visit by its inspectors and technicians in April, after Russian forces withdrew.

The agency said it was the first time in two months that it has received remote data from all nuclear power plants and spent fuel storage facilities in Ukraine where monitoring systems are in place.

Its head, Rafael Mariano Grossi, said this was “a very important step for the IAEA to continue to implement safeguards in Ukraine.”

Grossi cautioned, though, that on-site verification at the Zaporizhzhya nuclear plant “continues to be challenging owing to the presence of Russian forces and Rosatom personnel at the site,” calling the situation “unsustainable.”

Grossi said he has proposed leading an expert visit to Zaporizhzhya “after the necessary consultations and at the earliest possible opportunity.”

MOSCOW — The governor of a Russian region near Ukraine says that at least one civilian has been killed and another six have been wounded in the Ukrainian shelling of a village close to the border.

KYIV, Ukraine — Ukraine’s Foreign Ministry has accused Russia of stealing the country’s grain and trying to sell some of it at global markets.

The ministry said in Wednesday’s commentary that the stealing of Ukrainian grain amounts to looting.

It warned countries that purchase Russian grain that some of its shipments could contain the grain stolen from Ukraine, making its buyers possible accomplices.

The ministry cited official estimates indicating that Russia already may have stolen 400,000-500,000 metric tons of grain that cost over $100 million. It charged that “practically all ships leaving Sevastopol with a load of grain are carrying the grain stolen from Ukraine.”

It urged the global community to toughen the sanctions against Russia.

TURIN, Italy – A Ukrainian band that’s competing in this year’s Eurovision Song Contest turned out in a Turin park for a rally with a few dozen of their compatriots to express solidarity for their war-ravaged homeland.

Ahead of Wednesday night’s competition, the Kalush Orchestra posed for photos with some 50 Ukrainians who live in Italy.

Each of the rally’s participants put a hand to the heart in a sign of devotion to Ukraine.

Kalush Orchestra this week was one of the entrants advancing to the finals of the wildly popular European annual songfest, whose winner will be decided on Saturday.

The Ukrainians rallied behind a stage where free concerts by some of the musical groups from among the 35 nations sending entries are held nightly on the sidelines of the actual competition.

The upbeat entry by Kalush Orchestra for the competition is a song that was composed by the band’s front-man as a tribute to his mother.

But the song, “Stefania,” has been transformed to a kind of anthem to Ukraine, which was invaded by its powerful neighbor Russia on Feb. 24.

The song quickly became a sentimental favorite for many of Eurovision’s fans.