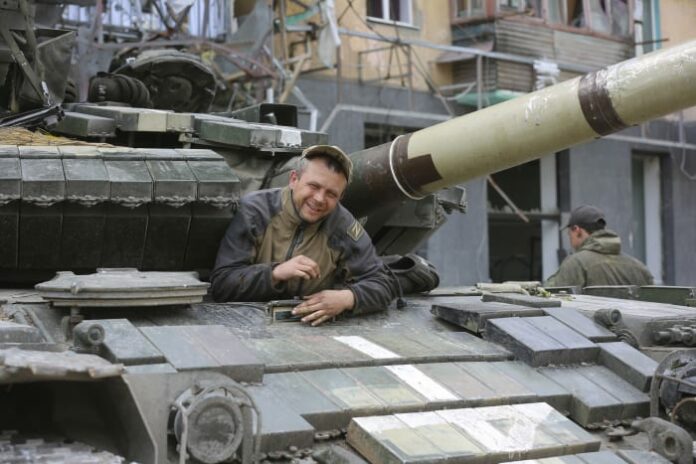 KYIV, Ukraine — Ukraine’s General Staff says the country’s forces made some gains on the border of the southern regions of Kherson and Mykolaiv and repelled multiple Russian attacks in the east.

In its daily morning update, the General Staff said that the Russians “lost control over several settlements on the border of Mykolayiv and Kherson regions.” Ukrainian forces also repelled 11 attacks in the Donetsk and Luhansk regions, the update said.

At the same time, fighting over the Azovstal plant in Mariupol continued, the General Staff said.

“With the support of aircraft, the enemy resumed the offensive in order to take control of the plant,” the update said, adding that the Russian troops were “trying to destroy Ukrainians units” at this last remaining pocket of Ukrainian resistance in the ravaged port city.

The General Staff also noted Russian efforts to stir tensions in the Moscow-backed breakaway region of Transnistria in Moldova, which borders with Ukraine and has a Russian peacekeeping contingent. The Russian military “carries out regrouping of troops in certain areas, takes measures to replenish reserves” and is “trying to improve the tactical position of its units.”

The General Staff’s statements could not be independently verified.

LVIV, Ukraine — The British military is saying an ongoing military drill in Belarus “is not currently anticipated” to threaten Ukraine.

The British Defense Ministry made the statement Thursday in a daily intelligence briefing posted to Twitter.

It comes after Belarus announced snap military drills. That sparked suspicion in Ukraine as Russia used Belarus to funnel troops through at the start of the war in February before Ukrainian forces repelled an advance targeting the capital, Kyiv.

“Russia will likely seek to inflate the threat posed to Ukraine by these exercises in order to fix Ukrainian forces in the north, preventing them from being committed to the battle for the Donbas,” the British military said.

It added: “Deviation from normal exercise activity that could pose a threat to allies and partners is not currently anticipated.”

UNITED NATIONS — The United Nations says more than 300 civilians from the besieged southeastern city of Mariupol and four other towns have been evacuated to Ukrainian-held Zaporizhzhia in a second successful operation to get civilians out of areas subject to Russian shelling and attacks.

Osnat Lubrani, the U.N. humanitarian chief in Ukraine, said in a statement that many of the civilians from Mariupol, Manhush, Berdyansk, Tokmak and Vasylivka came Wednesday with nothing but the clothes they were wearing and are now getting humanitarian assistance. She said they’ll also receive “much-needed psychological support.”

Ukrainian President Volodymyr Zelenskyy said the 344 evacuated Wednesday are in addition to the more than 150 people who were evacuated earlier this week from the bunkers under the Azovstal steel mill in Mariupol, which is surrounded by Russian troops and reportedly came under renewed fire on Wednesday.

No civilians were reported evacuated from the plant on Wednesday. Zelenskyy said they are trying to reach an agreement to save those remaining at Azovstal, including women and children.

The commander of the main defending force at the Azovstal steel mill in the strategic Ukrainian port city of Mariupol says Russian troops have broken into the territory of the mill, where limited evacuations of besieged civilians occurred last week.

In a video posted Wednesday, Denys Prokopenko, commander of the Ukrainian Azov regiment, said the incursions had continued a second day “and there are heavy, bloody battles.”

Azovstal remains one of the biggest hubs of Ukrainian military resistance and has been subjected to massive Russian aerial bombardments and shelling. Russian State TV showed smoke rising over Azovstal.

Hundreds of Ukrainian forces from different parts of the army, as well as civilians, remain in the plant’s underground shelters.

A Russian government statement said its armed forces and their allies would open a humanitarian corridor on specified hours from Thursday through Saturday from the Azovstal steel mill in Mariupol, Ukraine, so civilians can be evacuated.

The statement appeared on the Telegram messaging app Wednesday and pledged the forces would refrain from military actions, withdraw to a safe distance and facilitate the withdrawal of the civilians to any destination they choose.

But there was no immediate confirmation of those arrangements from other sources and similar promises to set up evacuation corridors have collapsed, because of what the Ukrainians blamed on continued fighting by Russians. A United Nations spokesman said discussions about future evacuations were ongoing.