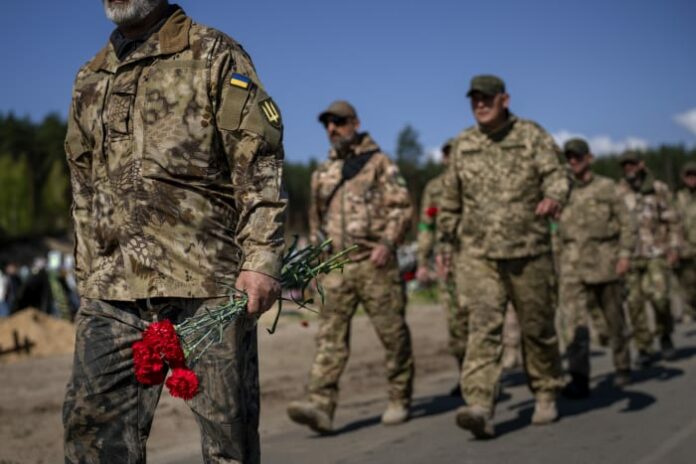 After prayers marking the beginning of the Muslim holiday of Eid al-Fitr, President Recep Tayyip Erdogan said that Russian President Vladimir Putin is “very sensitive” about Turkey’s need for tourism revenue and has already pledged to give his support.

In an interview with Greek state broadcaster ERT, Ukraine’s President Volodymyr Zelenskyy said Russian tourism brought revenue to neighboring Greece and Turkey and called this “blood money.” Zelenskyy pointed to a double standard where Turkey acted as a meditator between Ukraine and Russia while preparing destinations for Russian tourists.

Erdogan said he’ll speak with Russian President Vladimir Putin this week to discuss speeding up evacuations from the besieged Ukrainian city of Mariupol and to find a way for grain exports from Ukraine and Russia.

LVIV, Ukraine — The British military believes more than a quarter of all troops Russia deployed for its war in Ukraine are now “combat ineffective.”

The comment Monday came as part of a daily briefing on Twitter the British Defense Ministry has offered about the ongoing war in Ukraine. The British military believes Russia committed over 120 so-called “battalion tactical groups” into the war since February, which represents 65% of all of Moscow’s combat strength.

The ministry said, “It is likely that more than a quarter of these units have now been rendered combat ineffective.”

Combat ineffective is a term that refers to a military’s ability to wage war. Losing soldiers to wounds and death, as well as having equipment damaged or destroyed, affects that.

The British military said that some of Russia’s most elite forces, like the VDV Airborne, “have suffered the highest levels of attrition.”

It added: “It will probably take years for Russia to reconstitute these forces.”

KYIV, Ukraine — Svyatoslav Palamar, deputy commander of the Azov Regiment that is helping defend the last section of Mariupol not occupied by the Russians, said he was glad evacuations had begun.

Palamar hoped the evacuations from the Azovstal steel mill continue until everyone in the plant, civilians and soldiers, has gotten out. It’s been difficult even to reach some of the wounded inside the plant, he told The Associated Press in an interview from Mariupol on Sunday.

“There’s rubble. We have no special equipment. It’s hard for soldiers to pick up slabs weighing tons only with their arms,” he said.

The Azovstal plant is strewn with mines, rockets, artillery shells and unexploded cluster ordnance, he said.

He said the presence of children and civilians makes it harder to fight, and there are many injured people in the plant. There’s not enough water, he said, and the air smells of decomposing bodies.

The fighters in the plant will continue to resist until they receive an order not to, Palamar said.

An explosive device damaged a railway bridge Sunday in the Kursk region of Russia, which borders Ukraine, and a criminal investigation has been started. The region’s government reported the blast in a post on Telegram.

Recent weeks have seen a number of fires and explosions in Russian regions near the border, including Kursk. An ammunition depot in the Belgorod region burned after explosions were heard, and authorities in the Voronezh region said an air defense system shot down a drone. An oil storage facility in Bryansk was engulfed by fire a week ago.

The explosion Sunday caused a partial collapse of the bridge near the village of Konopelka, on the Sudzha-Sosnovy Bor railway, the report from Kursk said.

“It was a sabotage, a criminal case has been opened,” said the region’s governor, Roman Starovoit, according to the Russian News Agency TASS. He said there were no casualties, and no effect on the movement of trains.

KYIV, Ukraine — Four civilians were reported killed and 11 more were injured by Russian shelling in the Donetsk region on Sunday, the Ukrainian regional governor said that evening.

The deaths and seven of the injuries were in the northern city of Lyman, governor Pavlo Kyrylenko wrote in a Telegram post. One person also died in the city of Bakhmut from injuries received in the Luhansk region, he said.

In the same post, Kyrylenko said that it was impossible to determine the number of victims in the bombed-out port city of Mariupol and the town of Volnovakha, which is controlled by pro-Kremlin separatists.