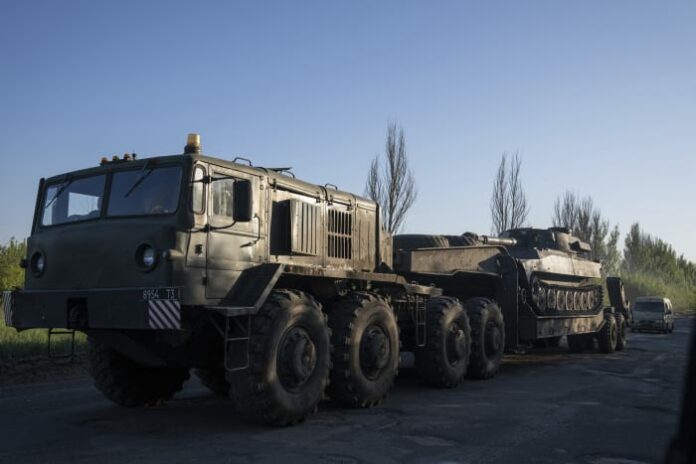 Leaders from the G-7 countries met online Sunday and announced their commitment to ban or phase out Russian oil imports in their latest effort to pressure Moscow into ending its aggression on Ukraine.

“It’s an extremely difficult decision for a country that mostly relies on energy imports, including oil,” Kishida told reporters Monday. “But G-7 unity is most important right now.”

Kishida said it will be a gradual and slow process of phasing out Russian oil imports and that details and timeline will be decided later as the process requires securing alternative energy sources.

Japan will not ban imports from its own stakes in oil and natural gas projects in Russia, including those in Sakhalin, Kishida said.

— More than 60 feared dead in bombing of Ukrainian school

UNITED NATIONS — The United Nations chief says he is “appalled” at the reported attack on a school in the Ukrainian town of Bilohorivka, where many people were apparently seeking shelter from fighting.

A U.N. spokesperson said Sunday that Secretary-General Antonio Guterres reiterates that civilians and civilian infrastructure must be spared under international law.

ZAPORIZHZHIA, Ukraine — More than 170 people have been evacuated from the Ukrainian city of Mariupol after weeks of shelling and fighting as Russia attempts to take over the port city.

That’s according to a Sunday statement by Osnat Lubrani, the United Nation’s humanitarian coordinator for Ukraine.

The evacuees have been taken to Zaporizhzhia, a city in southeastern Ukraine. Lubrani says more than 600 people have now been evacuated from the Mariupol area.

The most recent evacuation was the latest effort to rescue people from tunnels beneath the Azovstal steel mine, where Ukrainian fighters are trying to hold off Russian attackers.

The United Nations and the International Committee of the Red Cross have been coordinating the evacuations.

KYIV, Ukraine — U2 frontman Bono performed in a Kyiv subway station that serves as a bomb shelter on Sunday, showing his support for Ukrainians trying to fend off the Russian invasion.

The Irish singer has tweeted that Ukrainian President Volodymyr Zelenskyy “invited us to perform in Kyiv as a show of solidarity with the Ukrainian people and so that’s what we’ve come to do.”

Bono, alongside guitarist the Edge, sang the Ben E. King song “Stand By Me” in the Khreschatyk metro station. He was joined by another singer in Ukrainian military fatigues.

He also visited Bucha, a town outside Kyiv where hundreds of bodies were found after Russian troops withdrew last month. The town is considered a possible war crimes site.

KYIV, Ukraine — Leaders from the Group of Seven developed democracies pledged Sunday to phase out or ban the import of Russian oil as they met with Ukraine’s president, Volodymyr Zelenskyy, for online talks to stress their support and to display unity among Western allies on Victory in Europe Day, which marks Nazi Germany’s surrender in 1945.

Cutting out Russian oil supplies “will hit hard at the main artery of (President Vladimir) Putin’s economy and deny him the revenue he needs to fund his war,” the G-7 countries, which include the U.S., Britain, Canada, Germany, France and Italy and Japan, said in a statement.

“We will ensure that we do so in a timely and orderly fashion, and in ways that provide time for the world to secure alternative supplies,” they added.

Casting a look back at World War II, the leaders stressed unity in their resolve that Putin must not win.

“We owe it to the memory of all those who fought for freedom in the Second World War, to continue fighting for it today, for the people of Ukraine, Europe and the global community,” they said.