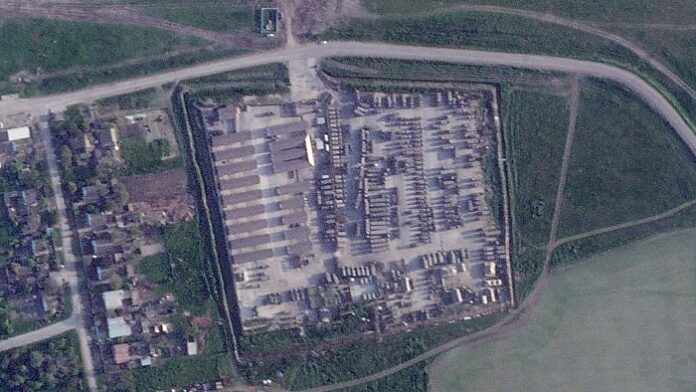 IRPIN, Ukraine — Canadian Prime Minister Justin Trudeau has made a surprise visit to Ukraine amid Russia’s war on the country.

Ukrainian media outlet Suspilne and Irpin Mayor Olexander Markushyn announced Trudeau’s visit to Irpin, which had been damaged by Russia’s attempt to take Kyiv at the start of the war. Markushyn posted images of Trudeau on social media, saying that the Canadian leader was shocked by the damage he saw at civilian homes.

Trudeau is the latest Western leader to come to Ukraine to offer their support to the country.

His office later confirmed the visit, saying in a statement “the prime minister is in Ukraine to meet with President Zelenskyy and reaffirm Canada’s unwavering support for the Ukrainian people.”

— Dozens of Ukrainians feared dead after Russian strike on school

Biden traveled under the cloak of secrecy, becoming the latest high-profile American to enter Ukraine during its 10-week-old conflict with Russia.

Her visit follows recent stops in the war-torn country by U.S. House Speaker Nancy Pelosi and other members of Congress, as well as a joint trip by U.S. Secretary of State Antony Blinken and U.S. Defense Secretary Lloyd Austin to meet with President Volodymyr Zelenskyy in Kyiv.

The first lady traveled by vehicle to the town of Uzhhorod from a Slovakian village that borders Ukraine.

ZAPORIZHZHIA, Ukraine — Dozens of Ukrainians were feared dead Sunday after a Russian bomb flattened a school sheltering about 90 people in its basement, while Ukrainian troops refused to surrender at a besieged steel plant that Moscow’s invading forces sped to seize before Russia’s Victory Day holiday.

The governor of Luhansk province, one of two areas that make up the eastern industrial heartland known as the Donbas, said the school in the village of Bilohorivka caught fire after Saturday’s bombing. Emergency crews found two bodies and rescued 30 people, he said.

“Most likely, all 60 people who remain under the rubble are now dead,” Gov. Serhiy Haidai wrote on the Telegram messaging app. Russian shelling also killed two boys, ages 11 and 14, in the nearby town of Pryvillia, he said.

According to the statement, Zelenskyy told Bärbel Bas, the President of the Bundestag, that Ukraine expects “strong and confident leadership from Germany” when it comes to helping Kyiv beat Russian aggression.

He noted the recent adoption by the Bundestag of a resolution calling on the German government to expand and accelerate the provision of heavy weapons to Ukraine. He also expressed confidence in Berlin’s official support for granting Ukraine E.U. candidate status.

“We really appreciate that on the Day of Remembrance and Reconciliation itself, and in what for us is such a trying time of war, the President of the German Bundestag Bärbel Bas came to support Ukraine,” said a post published Sunday afternoon on Zelenskyy’s Telegram channel.

The Time of Remembrance and Reconciliation for those who died in World War II, marked on May 8 and 9, is an annual international day of remembrance designated by a 2004 U.N. resolution.

In an interview with the German newspaper Rheinische Post, Bas called her meeting with Zelenskyy “very good and friendly,” adding that she had come to Ukraine because she felt it “was important to me to personally express Germany’s solidarity with Ukraine” to him.

She added that Germany will do everything in its power to support Ukraine, including backing its efforts to join the European Union and providing aid to help with rebuilding.

MARIUPOL, Ukraine — To demonstrate success in time for Russia’s key Victory Day holiday on Monday, the Russian military worked Sunday to complete its takeover of the southern Ukrainian port city of Mariupol, which has been under relentless assault since the start of the war.

The sprawling seaside steel mill where an estimated 2,000 Ukrainian fighters were making a last stand is the only part of the city not under Russian control.

All the remaining women, children and older civilians who were sheltering with the fighters in the Azovstal plant were evacuated Saturday. The Ukrainian troops rejected deadlines given by the Russians who said the defenders could leave with their lives if they laid down their arms.

“We are under constant shelling,” he said, adding that Russian infantry tried to storm the plant — a claim Russian officials denied in recent days – and to lay landmines. Palamar said there was a “multitude of casualties” at the plant.

Lt. Illya Samoilenko, another member of the Azov Regiment, said there were a “couple of hundred” wounded soldiers at the plant.

ZAPORIZHZHIA, Ukraine — Sparks fly as a circular saw slices into metal, while welders nearby work feverishly to the sound of blaring heavy metal. Upstairs, sewing machines clatter as women mark patterns on cloth being shaped into bulletproof vests.

An old industrial complex in the southeastern Ukrainian riverside city of Zaporizhzhia has become a hive of activity for volunteers producing everything from body armor and anti-tank obstacles to camouflage nets, portable heating stoves and rifle slings for Ukrainian soldiers fighting Russia’s invasion. One section specializes in vehicles, armor-plating some, converting others into ambulances. Another organizes food and medical deliveries.

With front lines all across Ukraine, some sections of the operation, such as the stitching of bulletproof vests, are working around the clock in shifts to meet demand. Crowdfunding has brought in enough money to buy steel from Sweden, Finland and Belgium, which is lighter than local steel, organizers say, a crucial quality for body armor.

KYIV, Ukraine — After rescuers evacuated the last civilians from the besieged steel mill in Mariupol, Ukrainian President Volodymyr Zelenskyy said in his nightly video address that work would continue Sunday on securing humanitarian corridors for residents of Mariupol and surrounding towns to leave.

The Ukrainian government has reached out to international organizations to try to secure safe passage for the fighters remaining in the plant’s underground tunnels and bunkers.

The Ukrainian leader was expected to hold online talks Sunday with British Prime Minister Boris Johnson, U.S. President Joe Biden and leaders from other Group of Seven countries. The meeting is partly meant to display unity among Western allies on Victory in Europe Day, which marks Nazi Germany’s 1945 surrender.

KYIV, Ukraine — Explosions echoed again Sunday across the major Black Sea port of Odesa, which Russia struck with six cruise missiles on Saturday, while rocket fire damaged some 250 apartments, according to the city council.

Ukrainian leaders warned that attacks would only worsen in the lead-up to Victory Day, the May 9 holiday when Russia celebrates Nazi Germany’s defeat in 1945 with military parades. Russian President Vladimir Putin is believed to want to proclaim some kind of triumph in Ukraine when he addresses the troops on Red Square on Monday.

Ukrainian President Volodymyr Zelenskyy released a video address Sunday marking the day of the Allied victory in Europe 77 years ago, drawing parallels between Russia’s invasion of Ukraine and the evils of Nazism.

The black-and-white video, published on social media, showed Zelenskyy standing in front of a ruined apartment block in Borodyanka, one of the Kyiv suburbs pummeled before Russian troops withdrew from the capital region weeks ago.

“Every year, on May 8, along with the whole civilized world, we pay our respects to everyone who defended the planet against Nazism during World War II,” Zelenskyy said, adding that prior generations of Ukrainians understood the significance of words “Never again,” a phrase often used as a vow to never allow a repeat of the horrors of the Holocaust.