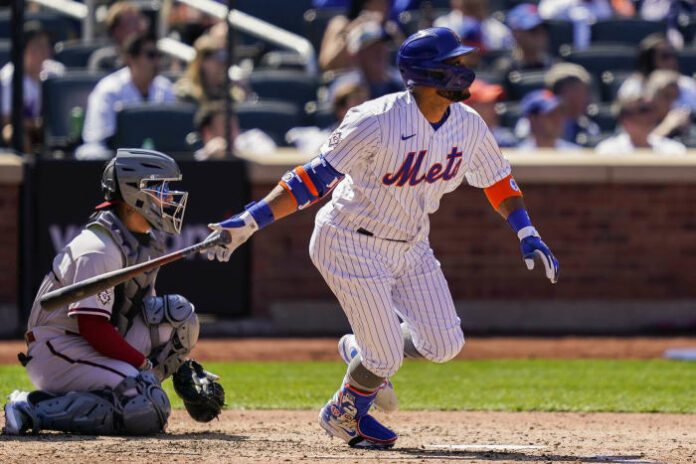 A look at what’s happening around the majors on Saturday:

Robinson Canó has found another job in the majors, signing with San Diego less than a week after being released by the Mets.

The Padres plan to use the 39-year-old Canó as a left-handed bat off the bench. Acting manager Ryan Christenson said he could get some occasional starts at second base and designated hitter.

“I’ve got a lot left in the tank,” Canó said. “I know I can still play this game and just go out on top.”

The Mets owe Canó nearly $45 million remaining on his original contract signed with Seattle. He will earn a prorated share of the $700,000 minimum.

Canó hit .195 with one home run and three RBIs in 43 plate appearances for the NL East-leading Mets. He sat out last season serving a second suspension for performance-enhancing drugs.

The eight-time All-Star second baseman had a career batting average of .302 with 335 home runs in 17 seasons when the Mets cut him.

Christenson has taken over the Padres while manager Bob Melvin recovers from prostate surgery.

The Padres said Friday that no cancer was found during the operation two days earlier. The 60-year-old Melvin had said he hoped to miss only the first six games of the team’s nine-game trip, which started in Atlanta this weekend and continues through Philadelphia and San Francisco.

Dodgers lefty Clayton Kershaw is out with inflammation in a pelvic joint, the seventh straight season he’s gone on the injured list. Los Angeles made the roster move several hours before he was set to face the Phillies at Dodger Stadium.

The 34-year-old Kershaw was bothered by pain in his pitching arm for the entire second half of last season and missed the Dodgers’ playoff run.

Kershaw (4-0, 1.80 ERA) is off to an outstanding start to his 15th season with the Dodgers. The three-time NL Cy Young winner has 32 strikeouts and just three walks in his five starts since signing a $17 million, one-year deal in March to return to his only professional club.

Prized Mariners pitching prospect George Kirby had a vocal cheering section in the Seattle stands for his impressive major league debut on Mother’s Day and figures to have another one when he faces the Mets in his second career start.

Kirby grew up in Rye, New York, about 22 miles north of Citi Field. He was drafted by the Mets out of high school in the 32nd round but went to college at Elon in North Carolina and was selected by Seattle with the 20th overall pick in 2019. The 24-year-old right-hander, rated one of baseball’s best pitching newcomers, threw six shutout innings with seven strikeouts and no walks Sunday against Tampa Bay after getting called up from Double-A Arkansas.

Kris Bryant could return to Colorado’s lineup soon after a cortisone injection eased the pain in his achy back.

The Rockies outfielder got the shot Monday, then played catch and hit in a batting cage Friday for the first time since being sidelined nearly three weeks ago. He’s expected to ramp up his workload Saturday and could begin a short minor league rehab assignment next week.

Bryant, who signed a seven-year, $172 million free-agent deal with the Rockies in March, is still looking for his first home run with Colorado. The four-time All-Star and 2016 NL MVP is batting .281 with four RBIs. He’s struck out 12 times in 57 at-bats.

Royals outfielder Whit Merrifield is scheduled to play in his 500th consecutive game, extending the longest streak in the majors, when Kansas City plays at Colorado.

Merrifield’s run began on June 25, 2018, and is the longest in the majors since Prince Fielder played in 547 straight from Sept. 14, 2010, to May 16, 2014. Merrifield has played six positions during the stretch: first base, second base, left field, center field, right field and DH.

Blue Jays left-hander Hyun Jin Ryu, sidelined since April 16 with a forearm issue, will be activated to start at Tampa Bay.

The 35-year-old allowed 11 runs over 7 1/3 innings in his first two starts before going on the injured list. After a quick visit to Triple-A Buffalo for a rehab start last Saturday, he’s set to rejoin the rotation. He’ll oppose Rays left-hander Ryan Yarbrough (0-0, 6.14).