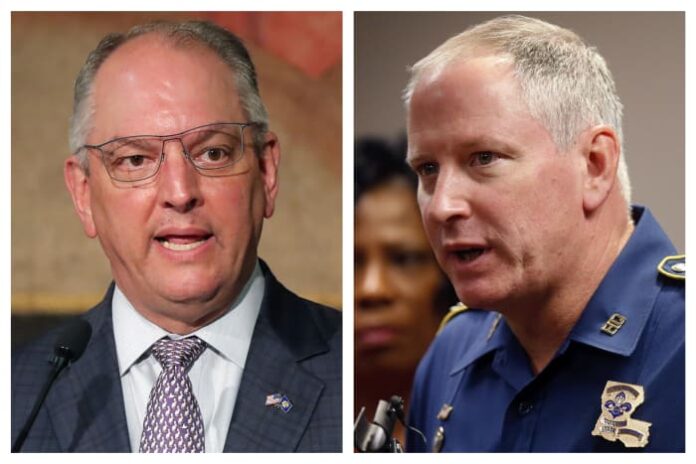 NEW ORLEANS – Lawmakers investigating the deadly arrest of Black motorist Ronald Greene are preparing to hold the former head of the Louisiana State Police in contempt for refusing to turn over his journals after talks broke down Monday in a dispute over an entry mentioning police brutality and Gov. John Bel Edwards.

The bipartisan committee will move “as soon as possible” to charge Kevin Reeves with contempt and begin legal proceedings to force him to turn over three handwritten journals he kept while leading the embattled agency, state Rep. Tanner Magee, who chairs the panel, told The Associated Press.

Holding the former head of the state’s premier law enforcement agency in contempt would mark a drastic escalation by the committee, which already has elicited explosive testimony from current police officials that they believe Greene’s 2019 death was covered up and that his beating by troopers after a high-speed chase amounted to “torture and murder.”

Reeves’ lawyer, Lewis Unglesby, said he had prepared photocopies of nearly a dozen journal entries to give to Magee during a meeting but the lawmaker “got excited and took off” without the materials.

“Col. Reeves isn’t in contempt of anything,” Unglesby told AP. “He has done nothing but be cooperative.”

The committee formed in February after an AP report that Edwards was informed within hours that troopers arresting Greene had engaged in a “violent, lengthy struggle.” Yet the Democrat stayed mostly silent on the case for two years as state troopers told Greene’s family and wrote in reports that he died as the result of a car crash after a high-speed chase outside Monroe.

The governor has said that he held off on speaking out about the troopers’ actions — even after privately watching graphic body camera footage of the arrest — because of an ongoing federal investigation. He’s since called the actions of the troopers involved criminal and racist.

AP last year obtained and published the long-withheld body-camera video that showed what really happened: troopers jolting Greene with stun guns, punching him in the face and dragging him by his ankle shackles as he wailed, “I’m your brother! I’m scared! I’m scared!”

The eight-member legislative panel for weeks has been interviewing state police and other officials in a bid to reconstruct the agency’s handling of the case. Last week, one senior state police official told lawmakers he was “mystified” that no troopers have yet faced criminal charges in Greene’s death. Another ranking official offered an extraordinary apology to Greene’s family, describing the 49-year-old’s fatal arrest as “a complete disregard for the sanctity of human life.”

Lawmakers have said they intend to investigate what Edwards knew and when he knew it, but no one on his staff has yet been called to testify.

Reeves, who described Greene’s death as “awful but lawful” and stepped down in late 2020 amid criticism, has sought to downplay his own involvement in the case. He told lawmakers in March that he had a follow-up conversation with Edwards about Greene’s death — concerning the initial coroner’s findings — but said the two did not discuss the case “in any depth” until late 2020, when word of Greene’s mistreatment and a federal civil rights investigation surfaced in media accounts.

In his testimony, Reeves also revealed he kept a journal with contemporaneous notes even after retiring as superintendent but would not commit to providing them to the committee.

“My journal is my personal business,” he said, “and I’m not here to discuss it.”

Lawmakers issued a subpoena for the journals in April, days after Reeves’ lawyer declined by letter to turn them over voluntarily, citing privacy and security concerns.

Magee, a Republican, said he sat down at Unglesby’s office Monday to discuss which portions of the “three small, moleskin journals” were relevant to the committee’s inquiry. During the meeting, the lawyer was willing to provide entries that mentioned Greene by name but resisted even showing Magee other portions without justification, the lawmaker said.

Talks broke down over a June 17, 2020, entry that Magee said mentioned the governor by name along with notes about how to handle body camera footage and police brutality in the future.

Magee said he thought the entry — which was made around the time protests over George Floyd’s killing were erupting across the country — could be related to Greene’s death. But he said Unglesby denied this and refused to turn it over, describing it as “just a random discussion on police brutality.”

“So I told him we’re going to proceed with going through with contempt charges,” Magee said.

Unglesby said he later emailed and faxed the entries he initially prepared for release to Magee, but withheld certain entries that involve “names and events” not related to the scope of the committee. He declined to release the materials to AP.

A spokesperson for the governor said Edwards likely saw Reeves on June 17, 2020, but they did not discuss Greene. She noted that a legislative committee had a hearing on policing issues on that date and said the governor only learned of the “serious allegations surrounding Mr. Greene’s death in September 2020.”

Magee said the way Reeves journal was written — “like a to-do list” — made it hard to say what the entries mean and that he only saw a fraction of them.

“I think it’s premature to make any accusations,” he said. “But I think it’s important we get the documents to put it into its proper context.