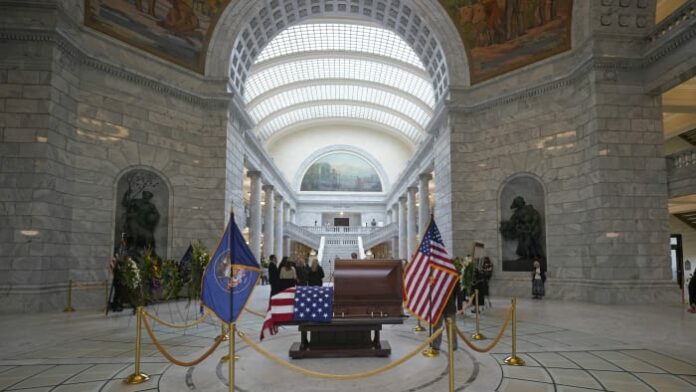 SALT LAKE CITY – A procession of family, friends and colleagues gathered to honor late U.S. Sen. Orrin G. Hatch, who is lying in state in Salt Lake City on Wednesday.

Hatch died on April 23 in Salt Lake City at age 88 from complications stemming from a stroke. A broad range of relatives, legal clients, campaign staffers, constituents and a friend from the mission he served for The Church of Jesus Christ of Latter-day Saints in 1954 paid their respects at an open-casket ceremony held in the rotunda of the marble-floored Utah Capitol.

Hatch’s funeral is scheduled for Friday at a Latter-day Saints chapel in Salt Lake City.

Born in poverty in Pennsylvania, Orrin Hatch rose to one of the highest echelons of politics, representing Utah in the Senate for more than four decades and at one point serving as the chamber’s president pro tempore, third in the line of succession to the presidency.

Hatch ended his seven-term tenure as the Senate’s longest-serving Republican in 2019. South Carolina Sen. Strom Thurmond served longer, yet only part of his tenure was as a Republican due to party-switching.

Hatch was known to constituents and colleagues as a steadfast conservative who opposed abortion, took a particular interest in the Supreme Court and supported tax and spending cuts. Throughout his career as senator, he also repeatedly brokered compromises with Democrats on policies including protections for people with disabilities, health insurance for children and on their nominees for the Supreme Court. As the one-time chair and longtime member of the Senate Judiciary Committee, he was part of the confirmation processes for more than half of the federal judges sat in U.S. history, according to his son, Brent Hatch.

“He understood how important the judiciary was,” Brent Hatch said.

In his final term in office before deciding not to run for reelection in 2018, Hatch became an close ally of President Donald Trump, helping shepherd to passage a major rewrite of the tax code and working on downsizing two national monuments in Utah, which had long been a top priority for the state’s Republicans.

Hatch was also noted for his side career as a singer and recording artist of music with themes of his religious faith, The Church of Jesus Christ of Latter-day Saints.

He is survived by his wife, Elaine, and their six children.

Brent Hatch said the family chose to hold Hatch’s lie in state ceremony in Utah — rather than in Washington, D.C., like his recently deceased colleagues Sens. Harry Reid, D-Nevada, and Bob Dole, R-Kansas — in recognition of his commitment to his constituents.

He said he heard an abundance of stories over the past week and a half about the encounters people had with his father, both politically and on a personal level, where he offered advice and encouragement to constituents that transcended politics.

“He was empathetic, sympathetic, concerned and did a fine job,” Egan said.