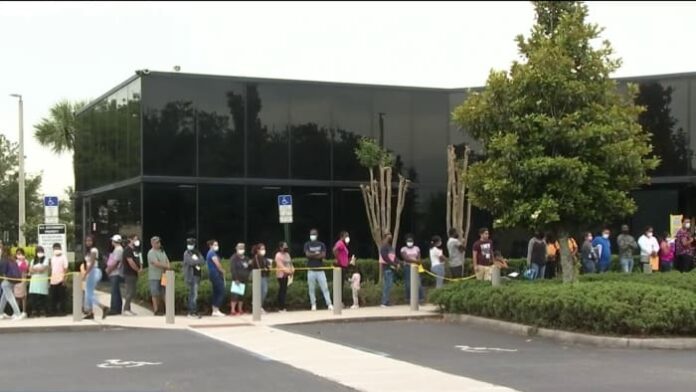 ORLANDO, Fla. – A backlog continued Tuesday at Orlando’s Immigration and Customs Enforcement office with dozens waiting to be seen by an immigration officer.

There was a nearly two-hour delay for cases to be seen after the office was scheduled to open at 8 a.m.

The group is made up of men, women, and small children who recently arrived from countries like Haiti, Cuba, Venezuela, and Colombia after crossing the southern border.

Mark Arias, an immigration attorney with Arias Law Offices in Orange County, said the backlog is a problem that began with a lack of organization from the Department of Homeland Security.

“(DHS) would schedule someone to come back in six months or in a year. I don’t think they really took into consideration the date they were giving out,” Arias said.

As people are forced to wait for hours outside, Arias said there needs to be action on the federal level.

“If the Biden Administration were to come in and say, ‘This is the exact guidance I want every office to have and there’s no wiggle room,’ that might be the efficient way of handling it until we get the numbers down and then we could go back to something more flexible,” Arias said.

The U.S. Immigration and Customs Enforcement agency has said it’s working to address the processing delays.

As many are still left waiting to be seen, Arias said the situation highlights the importance for some to seek out legal advice.

“Because of the inconsistency, right now if you’re going through an immigration process, you really do need a lawyer to help you guide it,” he said.