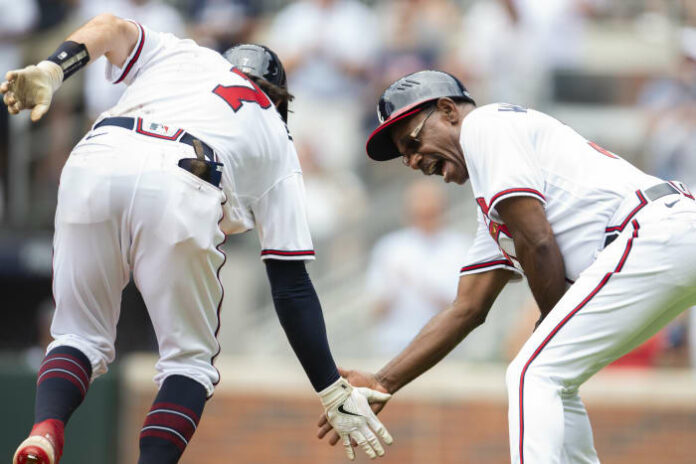 ATLANTA – Ha-Seong Kim had a run-scoring double to give San Diego the lead in a four-run 11th inning and the Padres beat the Atlanta Braves 7-3 on Sunday.

Kim’s double to left field off Jackson Stephens (0-1) drove in Jake Cronenworth, who opened the inning as the automatic runner on second.

Kim moved to third on a throwing error by shortstop Dansby Swanson and scored on Jurickson Profar’s grounder to second base, beating Ozzie Albies’ throw to the plate. The Braves committed three errors in the game.

Will Myers added a two-run single.

The Padres won two of three games in the series.

Swanson’s two-run homer off Joe Musgrove gave the Braves a 3-0 lead in the fourth. The Padres took advantage of two unearned runs to tie the game against Kyle Wright.

Swanson’s alert baserunning gave Atlanta a 1-0 lead in the second. He reached on a fielder’s choice grounder and advanced to third on Adam Duvall’s bloop single in front of Will Myers in right field.

Swanson scored on a head-first slide when Myers’ throw skipped past Robinson Canó at second base. The run on Myers’ throwing error was unearned.

Braves first baseman Matt Olson’s fielding error allowed Profar to score an unearned run in the fifth. Profar doubled off Wright and scored on Myers’ single in the seventh.

Luis García walked Ozuna with two outs in the eighth. Ozuna stole second and moved to third on García’s wild pitch before Albies popped out to end the inning.

Canó, who signed with San Diego on Friday after being designated for assignment by the New York Mets on May 2, made his Padres debut. Kim started at third base and Cronenworth made his first start of the season at shortstop.

Neither team could cite history of any game starting before noon, but first-pitch records are incomplete before 1989 and 1998.

Padres: LHP Blake Snell (groin) will return to the rotation and start at Milwaukee on Wednesday night after making three rehab starts.

Padres: Following an off day on Monday, RHP Mike Clevinger (0-0, 5.00) will make his third start of the season when the Padres open a three-game series at Philadelphia on Tuesday night.

Braves: RHP Ian Anderson (3-1, 4.20 ERA) is scheduled to start in the opener of a three-game series at Milwaukee on Monday night. Anderson allowed one run in six innings in a 5-1 win at Milwaukee on May 15, 2021, in his only career start against the Brewers.