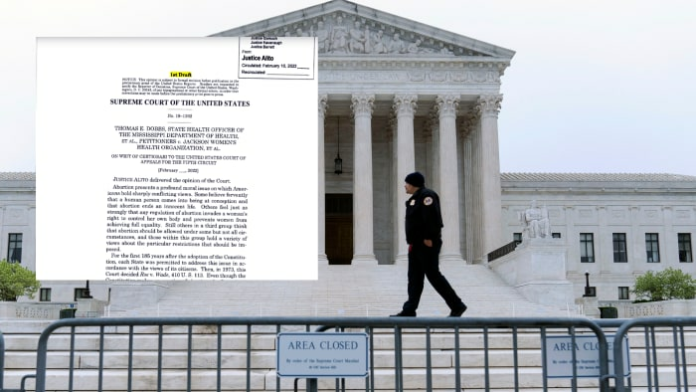 The Supreme Court’s leaked initial majority opinion on Roe v. Wade is nearly 100 pages long, and on Tuesday, Chief Justice John Roberts confirmed the document’s authenticity — but said it does not represent a final decision.

At issue is a case called Dobbs v. Jackson’s Women’s Health Organization. It calls on the Supreme Court to uphold a Mississippi law that would generally ban abortions after 15 weeks.

Supreme Court Justice Samuel Alito writes in the leaked initial draft, “Roe was egregiously wrong from the start. Its reasoning was exceptionally weak, and the decision has had damaging consequences.”

Roe v. Wade is a landmark Supreme Court decision that established a constitutional right to abortion.

In the leaked opinion, Alito writes, “The Constitution makes no reference to abortion, and no such right is implicitly protected by any constitutional provision, including the one on which the defenders of Roe and Casey now chiefly rely—the Due Process Clause of the Fourteenth Amendment.”

That clause says no person shall be deprived of life, liberty or property without due process of law.

He goes on to say that Roe is different than rights granted in other court decisions involving things including contraception and marriage because it destroys what Roe and Casey called “fetal rights” and what the Mississippi law at issue describes as an “unborn human being.”

The opinion says the legal principal calling courts to adhere to precedent doesn’t apply because “Roe was egregiously wrong from the start.”