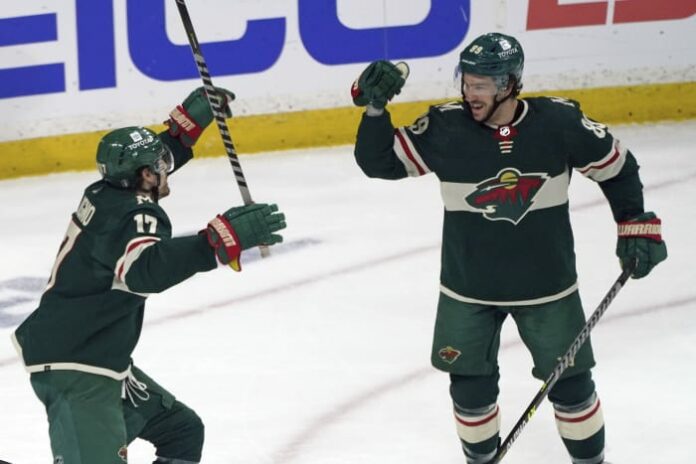 ST. PAUL, Minn. – Kirill Kaprizov had a hat trick and Joel Eriksson Ek scored twice for the Minnesota Wild, who snapped back at the St. Louis Blues with a 6-2 victory to even their first-round playoff series at one game apiece Wednesday night.

Frederic Gaudreau and Kaprizov scored on the power play for the Wild, who went 0 for 6 with the man advantage in their 4-0 defeat in Game 1 and were 1 for 9 against the Blues over three regular-season losses. The Wild beat their Central Division rival in regulation for only the third time in 16 games since the Blues won the Stanley Cup in 2019.

“It’s for sure helping to build confidence, knowing you can take the lead and run with it,” Eriksson Ek said.

The Blues didn’t score on Wild goalie Marc-Andre Fleury until Jordan Kyrou’s rebound midway through the second on a power play. They lost defenseman Robert Bortuzzo to injury after he blocked a shot with the side of his face in the first period,

“Once you know it hit him in the head, obviously that’s really scary,” St. Louis defenseman Colton Parayko said. “As a teammate and a friend, it’s tough to see. Hope he feels better.”

Vladimir Tarasenko had a goal and an assist for the Blues, who host Game 3 in St. Louis on Friday night.

“You come here, get a split and go home. You’re satisfied with that,” coach Craig Berube said. “It’s going to be a long series and you’ve got to battle and stay with it.”

Eriksson Ek assisted on Kaprizov’s first goal, a much-needed score on the power play that gave the Wild a 3-0 lead late in the first period.

Kaprizov, the precocious Russian star who set franchise records this season with 47 goals and 108 points, made it 5-2 with a slick tap-in of Mats Zuccarello’s pass on the rush. He added an empty-netter with 7:08 left after the Blues pulled goalie Ville Husso in their last-ditch effort.

In between Kaprizov’s scores, Eriksson Ek thought he had a hat trick himself. So did the dozens who tossed their caps on the ice, but a Blues challenge for offside erased that goal.

Eriksson Ek, the 2015 first-round draft pick from Sweden who was a Selke award finalist last summer for the NHL’s best defensive forward, has elevated his offense in a big way during this first season of the eight-year, $42 million contract he signed last summer.

Eriksson Ek broke Husso’s scoreless streak at 69:33 when he scored on Minnesota’s first on-target shot. After Bortuzzo’s stick broke on a clearing attempt, Jordan Greenway grabbed the puck and — passing it right past the defenseless Bortuzzo — fed Eriksson Ek on the sweet spot of his stick for the one-timer.

Fleury smiled from the crease as he saw the whole Wild bench jump up in elation.

“Maybe a little relief to get that first goal,” he said.

The Wild kept the same power-play lineup after their Game 1 struggle, and Gaudreau delivered on the first opportunity. After Justin Faulk was called for high-sticking, Husso left a juicy rebound of Jonas Brodin’s slap shot out front that Gaudreau knocked in.

Near the end of the first period, with Faulk in the penalty box again for slashing, Bortuzzo either stumbled forward or intentionally went low for the block — and had Eriksson Ek’s slap shot painfully ping off his face. Bortuzzo left the ice immediately and did not return.

A little later on that power play, Eriksson Ek’s redirect resulted in a rebound that Kaprizov tipped off the post. With Kevin Fiala crashing hard to the net, Husso couldn’t stop the puck from sliding past the goal line.

Then, just 51 seconds into the second period, Eriksson Ek gave the Wild a 4-0 lead. He stole a sloppy pass from Tarasenko that was supposed to go to Calle Rosen and deked Husso with a forehand-to-backhand dangle to poke the puck in for a glove-side goal.

The Wild were exasperated by their special teams struggles in Game 1. Though they didn’t stop taking avoidable penalties — giving the Blues three power plays in the second period — they killed four of them and did a much better job of controlling the rebounds Fleury kicked out.

Fleury made 32 saves for his 91st postseason win, his first with the Wild. The Xcel Energy Center crowd, which was buzzing all night, took a break from taunting Husso with a serenade of Fleury’s last name late in the game.

Bortuzzo’s departure left the Blues awfully thin on the blue line. Nick Leddy was scratched with an upper-body injury he sustained but played through in Game 1. Marco Scandella has not played in the series due to a lower-body injury.

NOTES: The Wild improved to 3-13 in playoff Game 2s. They raised their record to 2-8 in home games in the four postseason series in franchise history they’ve had with home-ice advantage as the higher seed. … The Blues fell to 10-2-1 on the road since the trade deadline on March 21. … Alex Goligoski replaced Dimitry Kulikov on the third defensive pair for the Wild.