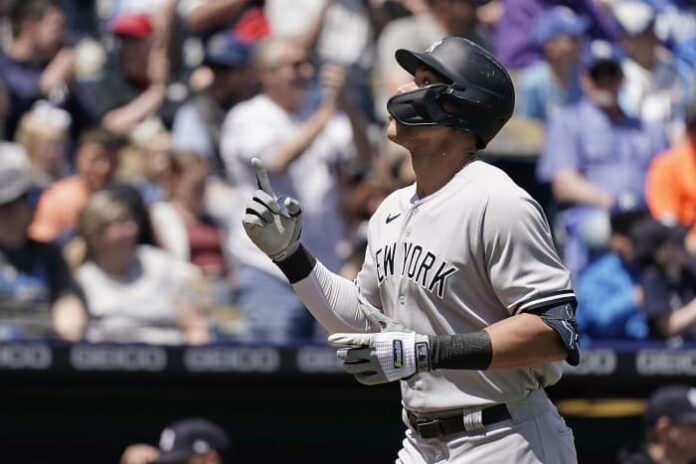 KANSAS CITY, Mo. – Aaron Judge homered twice to run his long-ball streak to three straight games, added the tying RBI in the seventh inning and helped the New York Yankees rally past the Kansas City Royals 6-4 on Sunday for their ninth straight win.

Judge has hit five home runs in his last five games and eight this season.

Clarke Schmidt (2-2) pitched a scoreless inning in relief of Yankees starter Luis Severino. Aroldis Chapman left the tying run on base in the ninth inning to earn his sixth save on the year and 20th in a row.

Judge returned from a scheduled day off to connect off Daniel Lynch for a drive estimated at 453 feet to center in the first inning. He added another no-doubt shot in the ninth.

But it was the big slugger’s checked-swing groundout, which traveled about 30 feet, that tied the game in the seventh. The oopsie RBI came after the Yankees had loaded the bases against Dylan Coleman (0-1) with nobody out, and Josh Donaldson followed it with a go-ahead grounder that gave New York the lead for good.

The Yankees, riding the longest winning streak in the majors, improved to 16-6. It’s only the fourth time since 1959 that the 27-time World Series champions have won at least 16 of their first 22 games.

Michael Taylor homered for Kansas City, which has lost eight of its last 10.

The Royals looked as if they might avoid the sweep when Nicky Lopez, Whit Merrifield and Andrew Benintendi loaded the bases in the third inning. Severino’s wild pitch allowed Lopez to score from third, and after Salvador Perez hit into a fielder’s choice, Carlos Santana snuck a two-out double down the right-field line to give Kansas City a 3-1 lead.

The Royals added another run in the fourth thanks in part to an error on third baseman DJ LeMahieu, the Yankees’ second in as many days. Prior to that, they had gone 13 straight games without committing one.

LeMahieu, atoning for his miscue, and Isiah Kiner-Falefa each drove in a run to get the Yankees within 4-3, and Judge and Donaldson completed the comeback. Judge punctuated the win with his homer in the ninth.

Yankees: OF Joey Gallo was out of the lineup after leaving Saturday night’s game with tightness in his left groin, though the injury is not considered serious. “I wanted to keep playing,” Gallo said, “but I think it’s just the smart move.”

Royals: C Cam Gallagher left the game with a strained left hamstring. … 3B Bobby Witt Jr. was removed from the starting lineup an hour before first pitch. He was hit on the wrist by a pitch Saturday night. “Yeah, he’s sore,” Royals manager Mike Matheny said, “so we’re just keeping an eye on him.”

The Royals play a makeup game Monday in St. Louis with RHP Zack Greinke (0-1, 2.86) on the mound, then the cross-state rivals return to Kansas City for two more games beginning Tuesday night.