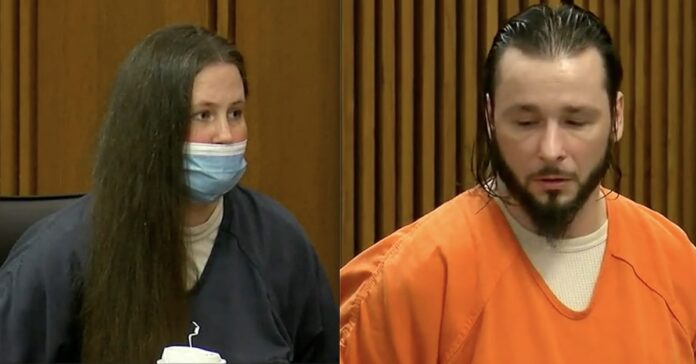 A 35-year-old mother in Ohio and her 39-year-old boyfriend were each given the maximum sentence and will spend several decades behind bars for starving, abusing, and torturing the woman’s 8-year-old son for approximately four years. Cuyahoga County Common Pleas Court Judge Sherrie Miday ordered Danielle Pascale to serve 62 to 67.5 years in prison while her boyfriend, Donald Gunderman, was sentenced to 34 to 39.5 years, court records reviewed by Law&Crime show.

Pascale and Gunderman in September both pleaded guilty to a spate of felony charges in connection with their horrific treatment of the child, which reportedly included urinating in his food, shooting him with a BB gun, locking him alone in the basement with only a bucket, and beating him with various objects.

Pascale pleaded guilty to three counts of child kidnapping, eight counts of endangering a child, and one count of tampering with evidence.

Gunderman pleaded guilty to six counts of endangering a child and one count each of child kidnapping, domestic violence, and tampering with evidence.

According to a report from Cleveland.com, prosecutors with the Cuyahoga County Prosecutor’s Office said the Euclid couple “systematically beat, tortured, and starved” the now-10-year-old little boy in such a horrendous manner that Judge Miday reportedly told the pair that she wished she had the power to send them both to prison for life without the possibility of parole.

“But since I don’t, there can be no justice unless this court removes both of you from our society for the maximum amount of time possible under the law,” Miday reportedly said during Thursday’s sentencing hearing.

The investigation into the couple reportedly began approximately 18 months ago. Doctors who were treating the child reportedly told authorities that the then-8-year-old was 35 pounds and about the size of a 4-year-old. He also reportedly had “sunken eyes,” per medical records.

Assistant Cuyahoga County Prosecutor Megan Helton reportedly told the court that Pascale lied to doctors about the child having various medical issues that accounted for his condition. An investigation into the couple for possible child abuse was launched shortly after and revealed the appalling conditions of the child’s daily life.

“A man who stayed in the home with Pascale and Gunderman in 2018 also provided police with a cellphone video recording of the boy crying out from the basement for several minutes that he was hungry while the family watched TV,” Cleveland.com reported. “Another person who stayed with Pascale when the boy was 4 years old told police Pascale frequently made the boy stand in a corner all night holding a gallon of water and deprived him of sleep as punishment.”

Investigators reportedly said that victim would often escape from the confines of the basement through a window and on several occasions neighbors found him “hiding in their dog house clutching food wrappers from the garbage,” the report states. Gunderman and Pascale reportedly responded by covering the basement windows with chicken wire.

Assistant Prosector Helton also reportedly told the court that Gunderman and Pascale had discussed a plan to try and influence the boy if he ever testified against them.

“[R]ecordings of phone calls from the jail showed the two concocted a plan in case there was a trial where Gunderman would whisper ‘I love you’ to the boy as he walked by him to testify to try to manipulate the boy,” the report states. “Gunderman then planned to turn to the boy’s father and wink to try to elicit an outburst in front of the jury, Helton said.”

Before the proceeding ended, Judge Miday reportedly said that the victim was now living with his biological father and was doing much better.