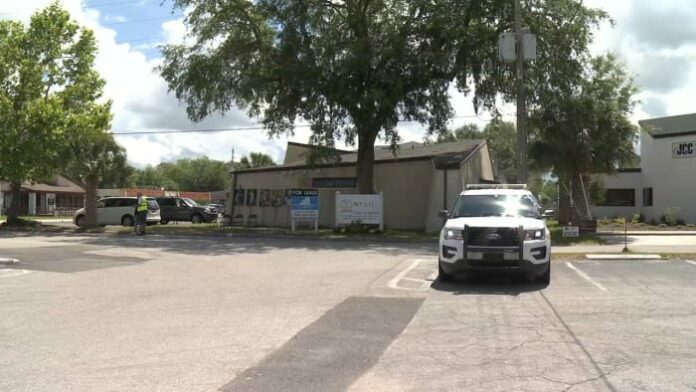 JACKSONVILLE, Fla. – Hundreds of people are expected to rally Saturday outside the Duval County Courthouse for abortion rights.

This comes after a draft opinion was leaked earlier this month, suggesting that the U.S. Supreme Court could be poised to overturn the landmark 1973 Roe v. Wade case that legalized abortion nationwide.

Since then, the Jacksonville Sheriff’s Office has received reports of unruly anti-abortion protesters outside A Woman’s Choice of Jacksonville clinic.

The protesters outside the clinic on Friday scurried away when they saw a News4JAX camera.

One man in a safety vest could be seen standing in a nearby lot and holding a painting of Jesus.

JSO is now monitoring the protests, having an officer keep watch outside following recent heated interactions between protesters and the clinic.

“I think it sickening,” said Amber Wilson, with Women’s March Jacksonville. “I understand everyone has an opinion, has a voice, and we celebrate religious freedom in this country, but when you start pushing your religion and your choices on other people, that’s when we no longer have freedom.”

The Jacksonville Sheriff’s Office on Friday released the following statement:

“When a protest occurs within the city, the Patrol Division will respond to keep the peace while protecting the rights of both the protestors and citizens. As such, beginning May 12, 2022, the Jacksonville Sheriff’s Office will have at least one officer at the University Boulevard location during normal business hours to ensure the safety of all parties. This plan will remain in place for the foreseeable future.”

Wilson said JSO will also be at The People’s Abortion Rights Rally, which will be held by Women’s March Jacksonville and Florida Access Network outside the Duval County courthouse at noon Saturday. It’s to protest the suggestion the high court could overturn Roe v. Wade, as well as Planned Parenthood v. Casey, a 1992 decision that protected abortion services even though it allowed states to add some limitations. If overturned, abortion rights would go to the states.

“I think it’s absolutely repulsive. It’s a precedent that we’ve had for 50 years that has really leveled the playing field for women,” Wilson said. “But when you start pushing your religion and your choices on other people, that’s when we no longer have freedom.”

Women’s March Jacksonville said that members of the community who wish to share their stories at Saturday’s rally will be able to do so. Those who wish to speak are asked to meet at 11 a.m. at the courthouse.

Vicky Dilone is an anti-abortion advocate who has participated in several peaceful March for Life protests.

“I am very happy to hear that we might be overturning Roe v. Wade,” Dilone said. “I think that it is very unconstitutional.”

She said her passion came after seeing a relative face trauma from receiving an abortion.

“I saw that it still affected her many years later, and it was something she was ashamed to say,” Dilone said. “I feel like the real war on women is abortion.”

“This isn’t just a war on women,” Wilson said. “Legislation like this disproportionally affects women of color and women living in impoverished communities.”

Women’s March Jacksonville and other groups also organized a rally on May 4 outside the courthouse. That rally was held two days after the draft opinion was leaked.

The leaked document was labeled a “1st Draft” of the “Opinion of the Court” in a case challenging Mississippi’s ban on abortion after 15 weeks, a case known as Dobbs v. Jackson Women’s Health Organization. The court is expected to rule on the case before its term ends in late June or early July.