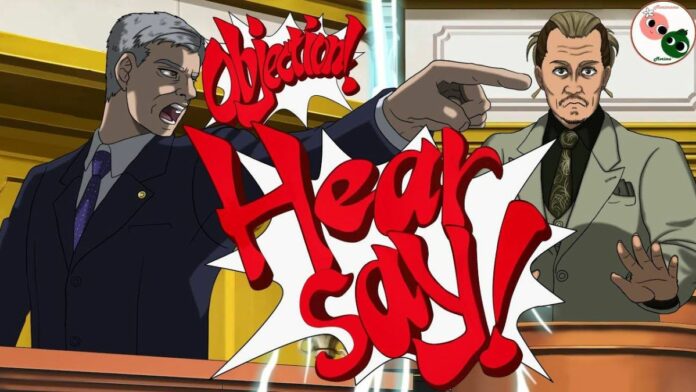 A YouTuber has recreated parts of the ongoing Johnny Depp vs Amber Heard trial in the style of Capcom’s Ace Attorney, a legal drama video game series.

YouTuber Marimomo Morimo has taken all the hallmarks of the Ace Attorney series, such as the dramatic comic book “Objection!” callouts and a health bar that represents the judge’s patience, to make a convincing recreation of how the trial would look if it was part of the game. The stylized artwork of Depp’s and Heard’s legal teams is also on point, as is how some of the trial’s key witnesses are depicted.

As the trial centers around a number of sensitive topics such as domestic and emotional abuse, viewer discretion is advised for some of Morimo’s videos that take snippets from the case. However, the video embedded below specifically focuses on how the objection to hearsay evidence – testimony from an under-oath witness who is reciting a statement that was made out of court – has been a common occurrence in the trial so far.

The Ace Attorney series celebrated its 20th anniversary on October 12, 2021, and has been adapted into an anime, live-action movie, multiple manga series, stage plays, escape rooms, and orchestra concerts. The latest game in the series, The Great Ace Attorney: Chronicles, was released on Nintendo Switch, PS4, and Steam on July 26, 2021.

If you’re new to the Ace Attorney series, the game puts you in the role of various defense attorneys, the most popular of which is Phoenix Wright. You’re tasked with investigating cases, defending clients, and finding the truth by cross-examining witnesses to spot inconsistencies between their testimonies and the evidence that has been submitted.

When does the Johnny Depp vs Amber Heard trial end?

The Johnny Depp vs Amber Heard trial resumes today at 2pm BST / 9am ET, and is set to conclude on May 27. Mr. Depp is suing his ex-wife for defamation over a 2018 op-ed that was published in The Washington Post. Depp alleges that the op-ed caused him to suffer a loss of earnings, which Heard denies as she says the op-ed wasn’t about Depp. The Pirates of the Caribbean star is suing Amber Heard, of Aquaman fame, for $50 million (£40 million), while Heard is countersuing Depp for $100 million (£90 million).