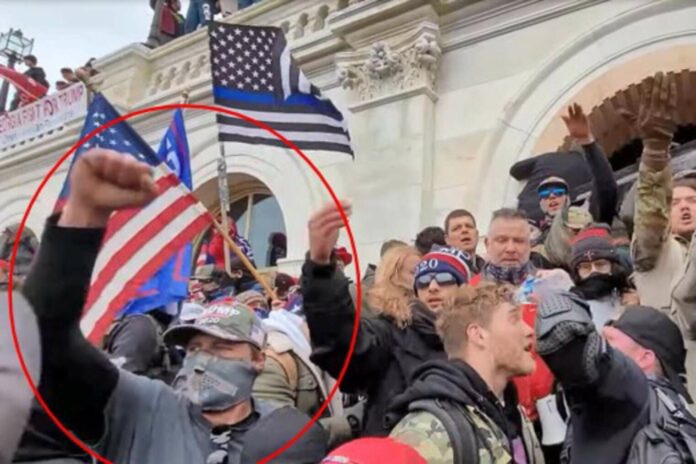 WASHINGTON — A Jan. 6 rioter who dragged former Washington, D.C., Police Officer Michael Fanone into the crowd on the steps of the U.S. Capitol was sentenced to 7.5 years in federal prison Thursday.

Albuquerque Head, 43, of Tennessee, was sentenced to 90 months in federal prison, a bit shy of the 96 months prosecutors had requested but still one of the longest sentences to date in the Capitol riot cases. Head will get credit for the roughly 18 months he has spent locked up already.

Fanone urged U.S. District Judge Amy Berman Jackson to sentence Head to the maximum, saying Head had cut his career in law enforcement short. Fanone suffered a heart attack and a traumatic brain injury in the assault on Jan. 6, 2021, and ended up resigning from the Metropolitan Police Department.

“Show him the same mercy that he showed me on Jan. 6 … which is none,” Fanone said.

Head dragged Fanone into the mob on Jan. 6 while yelling “I got one!” Before that, he used a police shield to push against a line of police officers in the western-facing tunnel of the Capitol, where some of the most violent acts of the insurrection took place. He pleaded guilty to a felony charge of assaulting, resisting or impeding officers.

Jackson said Head’s actions were “some of the darkest acts committed on one of our nation’s darkest days.” She pointed out all the opportunities Head had to remove himself from the battle against police but instead re-armed with a police shield and went back to the front line.

Jackson also pointed out the irony that Fanone was attacked under a Blue Lives Matter flag. The people attacking Fanone “didn’t think Blue Lives mattered much at all” when officers were standing in their way, she said.

Jackson said it was important to send a message to those who would seek to overturn elections in the future.

“People need to understand that they can’t do this, or anything like this, again. They can’t try to force their will on the American people once the American people have already spoken at the ballot box. That’s the opposite of democracy — it’s tyranny. And the threat to democracy, the dark shadow of tyranny, unfortunately, has not gone away,” Jackson said.

“There are people who are still disseminating the lie that the election was stolen. They’re doing it today,” she continued. “And the people who are stoking that anger for their own selfish purposes, they need to think about the havoc they’ve wreaked, the lives they’ve ruined, the harm to their supporters’ families, even, and the threat to this country’s foundation.”

Fanone, who has testified before the House Jan. 6 committee and recently wrote a book about the insurrection, said the notoriety he has found since he was nearly killed on Jan. 6 hasn’t been worth it, and he said he is devastated that he lost his career in law enforcement.