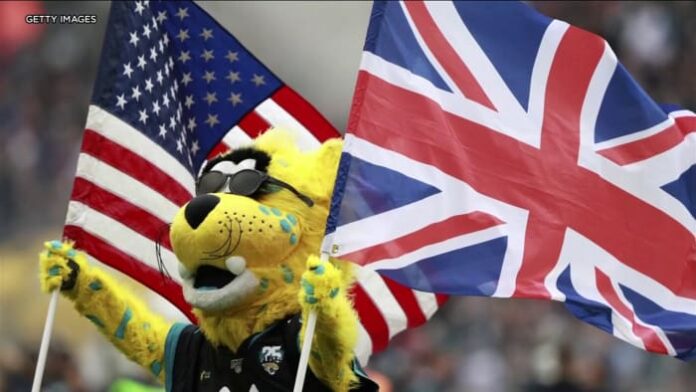 JACKSONVILLE, Fla. – The Jaguars will square off against the Denver Broncos when they head back to Wembley Stadium for the 2022 regular season.

The NFL announced in February that Jacksonville would make its annual trip to London, and Wednesday they announced the Jaguars’ opponent.

RELATED: Jaguars to play 1 home game annually at Wembley through ‘24

There will be five international games this year — three in the United Kingdom, one in Mexico and another in Germany.

Jacksonville has played a game in London since 2013, with the exception of the pandemic-affected 2020 season when the NFL scrapped all international series games.

The Jaguars are 4-4 overseas, including a 23-20 win over the Dolphins last year that ended a 20-game losing streak.

The return to Wembley will mark the first time Jacksonville has played in the iconic stadium since 2019. During its last two trips, the Jaguars have played in Tottenham Hotspur Stadium.

The upcoming game in London marks the first time the Jags will have full control of the London game, including ticketing. The team credits about 11% of its local revenue from playing abroad.

This will be Denver’s second international game after the Broncos played in London in 2010.

Owner Shad Khan has been steadfast in expanding the Jaguars’ brand in international games. In 2020, he planned on the team playing two home games overseas, which was poorly received by Jacksonville fans. The pandemic scrapped that.

The Jags will play a home game at Wembley through at least the 2024 season.

The NFL will play its first-ever regular-season game in Munich this year.

We are very pleased to welcome Munich and Frankfurt to the NFL family and are excited to reward our fans in Germany for their passion by bringing them the spectacle of regular-season NFL football,” NFL Commissioner Roger Goodell said in a release when the game was first announced. “We look forward to staging our first game in Germany at FC Bayern Munich’s fantastic stadium later this year and to exploring areas of broader collaboration with the Bundesliga.”