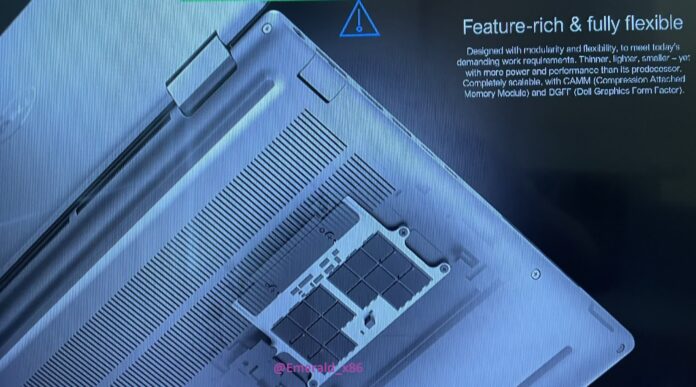 A hot potato: The upcoming Dell Precision 7670 laptop features a new form factor for DDR5 memory that it describes as beneficial to consumers, but many will likely see it as a way of locking buyers into the company’s products.

But it’s the laptop’s DDR5 memory that is drawing the most attention, and not for positive reasons. Dell uses its proprietary Compression Attached Memory Module (CAMM) form factor that replaces the two SO-DIMM memory slots. The marketing image (top) shows a single-sided module with two zones, each comprising eight integrated circuits. Dell writes that the laptop supports 128GB of this DDR5-4800.

While the new form factor should make the Dell Precision 7670 thinner, lighter, and smaller, it could potentially limit users looking for a future upgrade path if Dell keeps the CAMM technology to itself, which it probably will. That would mean anyone wishing to increase their memory would have to buy direct from Dell and pay whatever it feels like charging.

We can undoubtedly expect the Dell Precision 7670 to carry a hefty price tag. Some other highlights include the 500 nits brightness, 100% coverage of the DCI-P3 spectrum, three PCIe 4.0 M.2 slots for up to 12TB storage with RAID support, a camera shutter, proximity and ambient light sensors, and Intel Wi-Fi 6E connectivity. No word yet on a launch date.