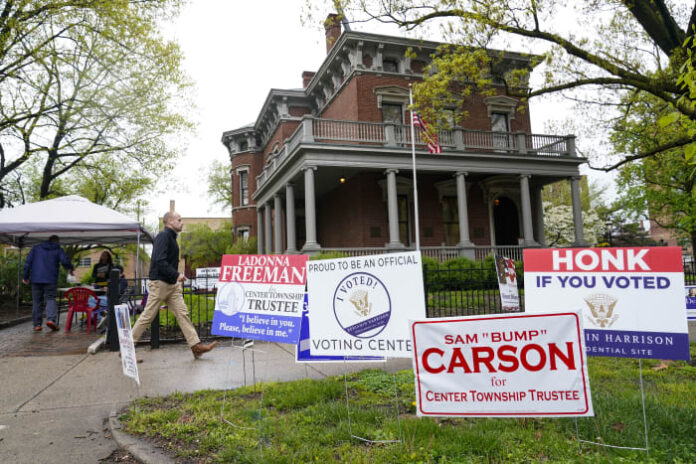 Roughly two dozen so-called liberty candidates were in Republican legislative races across the state, with their targets including several top-ranking members of the GOP-dominated House.

Those challengers argue the Legislature hasn’t been aggressive enough in attempting to ban abortion, enhancing gun rights and overturning COVID-19 restrictions that were ordered by Republican Gov. Eric Holcomb.

Republican legislative leaders argue the “no compromise” stances adopted by many challengers aren’t practical and tout the state’s low taxes and unemployment and broad private school voucher program among its conservative successes.

Unlike in other GOP races across the country — including Ohio, which also has a statewide primary Tuesday — the Indiana legislative contests have focused on state issues, rather than which candidate is closest to former President Donald Trump or has his support.

The challengers say they are tapping into a deep resentment among voters — and even winning a few seats could nudge the Legislature further to the right.

It was unclear how the leak of a draft opinion suggesting the U.S. Supreme Court will overturn a 1973 ruling that legalized abortion nationwide would impact the primary. Indiana lawmakers didn’t pursue major anti-abortion action during this year’s session as they waited for a decision from the Supreme Court. If the court overturns Roe v Wade, those lawmakers could ask Republican Gov. Eric Holcomb to call the Legislature into a special session so they can act without having to wait until 2023.

“The vast majority of House Republicans, including myself, have been abundantly clear that we want to take action to further protect life should the U.S. Supreme Court overturn, in full or in part, Roe,” Republican House Speaker Todd Huston said in a statement Tuesday. “We will continue to await the court’s final decision.”

Indiana law generally prohibits abortions after 20 weeks of pregnancy, with 99% of abortions in the state occurring at 13 weeks or earlier, according to a state Health Department report.

The state House GOP campaign operation has given over $1 million to candidates for the primary — including those trying to unseat hard-right Republican Reps. Curt Nisly of Milford and John Jacob of Indianapolis. Both are heroes of the “liberty candidate” challengers for proposals blocked by legislative leaders, including a total abortion ban and seeking to void all state COVID-19 restrictions as far back as late 2020.

Meanwhile, the Liberty Defense PAC, which has worked to rally support for its endorsed candidates, had raised a total of about $95,000 by the end of March.

“Some of our incumbents are facing very, very engaged opponents,” Huston said. “You can’t take any chances. Our team has been doing everything they need to do, knocking on doors, lots of voter contacts, those types of things. Nobody should take it lightly.”

Some challengers say their movement grew from protests against COVID-19 shutdowns and complaints that GOP legislators didn’t take action to end Holcomb’s executive orders, including a mask mandate.

Brittany Carroll, a family law attorney from Greenwood running against Rep. Peggy Mayfield of Martinsville, said too many government officials, from Holcomb to local school board members, had ignored concerns from the public and favored monied interests. She and other challengers said they weren’t deterred by heavy spending to defeat them.

One voter favoring Jacob said he believed more legislators like him would better ensure personal freedoms and increase the push to restrict access to abortions in Indiana.

“I’m a conservative Christian, and I can see that in our culture today, there is so much moving in directions that are not Biblical, and I’m thinking that might be part of the pushback” against many current lawmakers, said Mike Teipen, 73, of Indianapolis. “It maybe rubs people too much the wrong way — they don’t want to take a strong stand on certain issues. But that’s what I think makes a good lawmaker.”

The “liberty candidates” are predominantly running in heavily Republican districts, so even primary wins by far-right challengers would likely provide few opportunities for Democrats to dent the GOP’s current 71-29 House majority.

But victories by Nisly and Jacob and some of their allies could prove a major thorn for Huston and other legislative leaders, said Mike Murphy, a former Republican legislator from Indianapolis and past Marion County GOP chair.

“Then Huston has to deal with them, he can’t just censor them or say they’re inappropriate,” Murphy said. “He’s actually got to negotiate.”