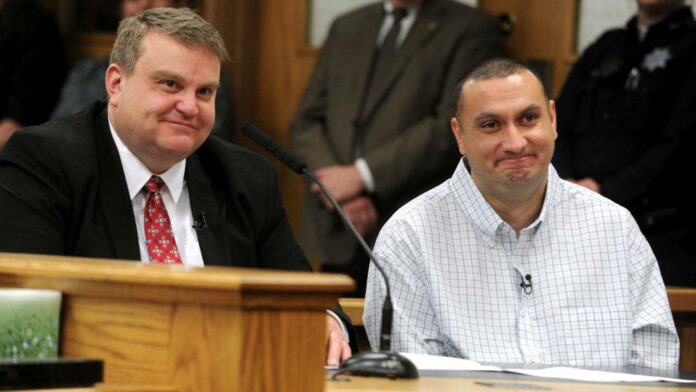 Christopher Tapp spent 20 years in prison for a murder he did not commit. He was exonerated in 2019, and the person who really killed Angie Dodge, 18, of Idaho Falls, was sent to prison.

The city of Idaho Falls, Idaho, has agreed to pay $11.7 million to a man who spent 20 years in prison after he was wrongfully convicted of murdering an 18-year-old woman in 1996.

The man, Christopher Tapp, was cleared in 2019 of the murder of Angie Dodge of Idaho Falls after the slain teen’s mother sought to have investigators take another look at the case, in light of advances in DNA analysis and the use of genetic genealogy.

The new evidence connected another man, Brian Leigh Dripps Sr., to the crime. Mr. Dripps ultimately confessed to the killing and pleaded guilty in February 2021 to first-degree murder and rape. He was sentenced in June 2021 to life in prison.

In a letter dated Monday — three days before the City Council approved the payment — Mayor Rebecca Casper apologized to Mr. Tapp for the city’s role in his conviction and incarceration, saying she hoped that the settlement and apology would help bring closure.

“In addition to the settlement, the city pledges to review its policies, procedures, and training (especially related to custodial interrogations) and to revise them, as needed, to prevent any recurrence of what happened in your case,” Ms. Casper wrote.

In a statement quoted by The Associated Press, Mr. Tapp, 45, said: “No dollar amount could ever make up for the over 20 years of my life I spent in prison for crimes I did not commit. However, the settlement will help me move forward with my life.”

On June 13, 1996, Ms. Dodge had been sleeping when Mr. Dripps broke into her apartment in Idaho Falls, raped her and then nearly decapitated her, the authorities said. Her killing went unsolved for about a year, until a friend of Ms. Dodge’s was arrested in an unrelated rape that also involved a knife.

Mr. Tapp, who was 20 at the time, was friends with the man and had emerged as a suspect himself. Representatives of the Innocence Project, which works to overturn wrongful convictions, said that investigators had threatened to pursue the death penalty against Mr. Tapp and offered him immunity if he confessed to killing Ms. Dodge, which he did and later tried to renounce.

Mr. Tapp at first adamantly denied that he had any idea who had killed Ms. Dodge. But throughout the course of a 30-hour interview process spread across several weeks, investigators would not accept his story. Mr. Tapp’s legal advocates would later say that police officials had psychologically manipulated him into confessing.

Despite DNA evidence collected from the crime scene that did not match his own, Mr. Tapp was convicted of rape and murder in May 1998 and sentenced to life in prison.

The case regained momentum more than a decade ago when Ms. Dodge’s mother, Carol, sought the involvement of the Idaho Innocence Project, which is based at Boise State University. The group is part of a network of legal advocacy nonprofits affiliated with the Innocence Project, a national organization based in New York that also became involved in the case. Not convinced that her daughter’s killer had been brought to justice because of the lack of a DNA match, Ms. Dodge had asked to see Mr. Tapp’s taped confession.

A genealogist who had been enlisted was able to create a new DNA profile for the killer from evidence collected at the crime scene. According to an arrest warrant affidavit from 2019, a family tree of potential suspects led to Mr. Dripps, who had lived across the street from Angie Dodge in Idaho Falls at the time of her murder but had moved to Caldwell, on the other side of the state. A discarded cigarette butt from Mr. Dripps matched the DNA evidence taken from the crime scene, the affidavit said.

Genetic genealogy, which matches crime-scene DNA to that of relatives, has been credited with providing investigators with breakthroughs in many cold cases, a majority of them yielding arrests. But Mr. Tapp’s case was the first time that the technique was used to clear a convicted killer’s name.

The ordeal that Mr. Tapp suffered was the result of “a hard-core case of tunnel vision” by law enforcement officials, Greg Hampikian, director of the Idaho Innocence Project, said in an interview on Friday evening.

He called this week’s settlement the culmination of “the best that exoneration work can do,” noting that an innocent man was freed, the true perpetrator was caught, and a civil process led to compensation for Mr. Tapp.

“The only thing left is for the city of Idaho Falls to take a serious and careful look at all of its current practices,” he said, adding, “That’s really the only way to honor the victim and her family, and Chris and his family.”