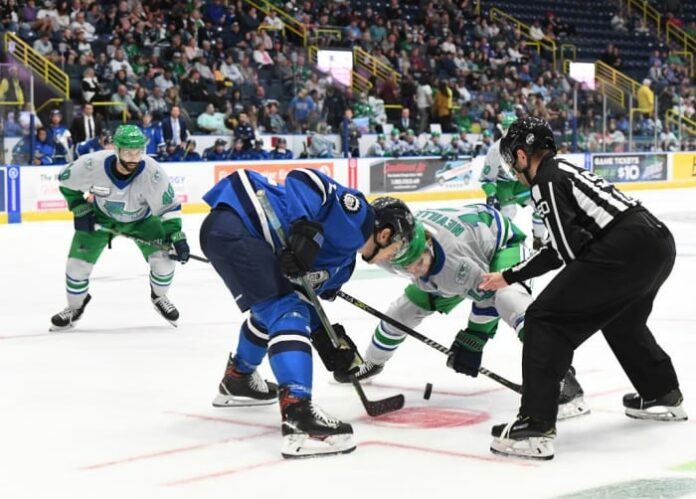 The Jacksonville Icemen are on fire in the ECHL’s Kelly Cup playoffs.

The team had never been past the first round before last week.

So, why stop there?

Jacksonville is ready for its divisional championship, headlined by a Sunshine State matchup against its biggest rival, the Florida Everblades.

“We won a bunch in overtime and a couple of shootouts so it is going to be tight and the team that makes the least amount of mistakes is going to win,” said first-year coach Nick Luukko.

The Icemen are coming off a win against the Atlanta Gladiators — skating away with a 5-0 win to advance to the second round. The Everblades topped the Greenville SwampRabbits 5-1 to win their first-round series 4-2 on Monday night.

When these teams meet, it’s always a battle. The teams split their last two games on March 25-26, with the Icemen winning 3-2 and the Everblades winning 3-1. Florida leads the all–time series 40-24, but Jacksonville won seven of the 10 games between the two this season.

What did all of those games have in common?

“It was a bloodbath that is the best way I could put it,” said Icemen forward Brendan Harris.

Game 1 of the best-of-seven series is scheduled for 7:30 p.m. on Friday at Hertz Arena in Estero. Game 2 is set for the following evening at 7 p.m. The series will then shift back to Jacksonville for games three, four, and if necessary, game five.

“You want to beat your archnemesis, no matter what it is in,” Harris said. “So, it is going to be a special one.”

For the Icemen, going on the road is a change of playoff pace. Thanks to an arena booking with Atlanta, the higher-seeded Gladiators had to play all four games of its first-round series at Jacksonville.

“We have been at home for a month so it is nice to get on the road for a couple days,” Luukko said. “We been going at it the whole year with each other. The games are intense and physical.”

The Icemen haven’t just won on the ice — they are also winning off the ice. The team managed to win over the hearts of Northeast Florida by becoming Jacksonville’s best sports team for the fourth consecutive year in a row in our JaxBest voting, partnered with Visit Jacksonville.

“Thank you Jax for naming us Jacksonville’s best sports team once again!” the Icemen posted on Twitter. “We’re lucky to call this beautiful city home!”

Tickets for the games in Jacksonville are available on Ticketmaster or by calling the Icemen box office at 904-602-7825.