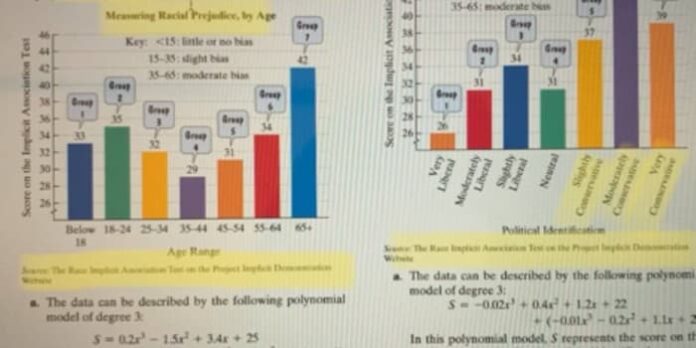 The News4JAX I-TEAM is digging through thousands of documents just released by the Florida Department of Education. They reveal what textbook reviewers flagged as Critical Race Theory (CRT) and other prohibited topics which led to the rejection of 54 unpublished math books. Governor DeSantis has targeted Critical Race Theory — saying the book authors are trying to ‘indoctrinate” Florida students.

Only 1 out of 70 textbook reviewers found Critical Race Theory in Florida’s math textbooks. And that reviewer is explaining to News4JAX why she recommended the book be disqualified or revised.

″The ones that stuck out the most were the ones that assumed that you had racial prejudice by age or by political affiliation,” Chris Allen with Moms for Liberty said.

Chris Allen is an Indian River County mother who was says she was surprised at the questionable material that was rejected in Florida’s math books.

In the textbook, Thinking Mathematically. Allen takes issue with this mathematical word problem, that asks students to measure racial prejudice by age using a bar chart. It’s not the only issue she says she had.

″I found some with social justice related topics,” Allen said. ”They asked students to justify their arguments for Roe v. Wade, abolishing the death penalty, recreation use of marijuana things like that.”

That answer from Allen – was prompted by a newly added question posed to book reviewers. It asks –“Do materials align to state law which prohibits Critical Race Theory in instructional material?”

Another book reviewer, Doreen Alvarez, responded to this question – after reading a second grade math book – saying, “While being culturally sensitive with names and illustrations, CRT is not taught.”

An answer more than 65 other book reviewers echoed in their reviews of Florida math books.

Gibson said she doubts the examples cited truly qualify as Critical Race Theory, doubling down saying CRT does not exist in Florida schools.

″And I believe that the using of something that does not exist in our state, is a way to try to divide us as individuals and in our communities,” Gibson said. “Because I believe that the fanning of flames to create division keeps the people in power, who want to create the division so that they can stay in power.”

News4JAX reached out to the governor’s office for comment about the few examples of Critical Race Theory that they have released and we have not heard back. Out of the 54 books that were rejected — the Department of Education says 19 have been revised by the publisher.