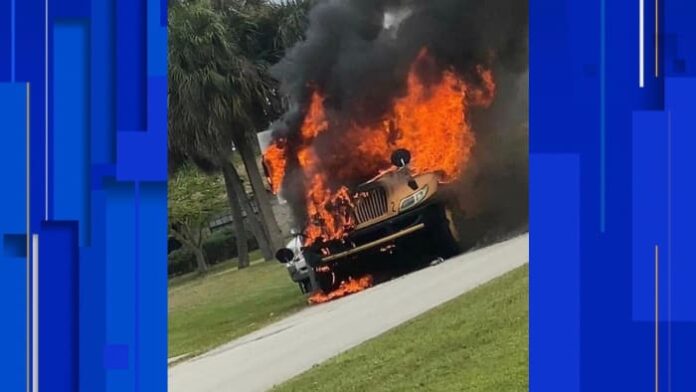 PALM BAY, Fla. – A West Melbourne principal said if not for the quick actions of a school bus driver, 40 students might have never come home.

Principal Brian DeGonzague said O’Connell quickly pulled over near Emerson Drive and Tillberg Avenue in Palm Bay and started getting the 40 children, in K-6, off the bus.

‘’Ms. Janet, when there’s a child in need, she steps up,’’ DeGonzague said.

The principal said he believes it was an electrical fire.

Degonzague said the the charter school manages its own buses and inspects them as often as every day.

He described the fire as being spontaneous in nature.

‘’It looked like something that could happen to any vehicle,’’ he said.

The school said the fire destroyed the camera on the bus so there’s no video.

Lori Chase, who lived near where the bus first stopped and started smoking, recorded video of the first flames after O’Connell and the students evacuated.

DeGonzague said the bus driver was humble as ever in response to the attention she’s now getting.

‘’When I spoke to her about it, she said, ‘Brian, I did what I did because I love my kids.’ She doesn’t want the spotlight on her, but what she did was pretty incredible,’’ he said.

The school said O’Connell was right back to work on Wednesday driving a different bus.

The school hopes to replace the destroyed bus.