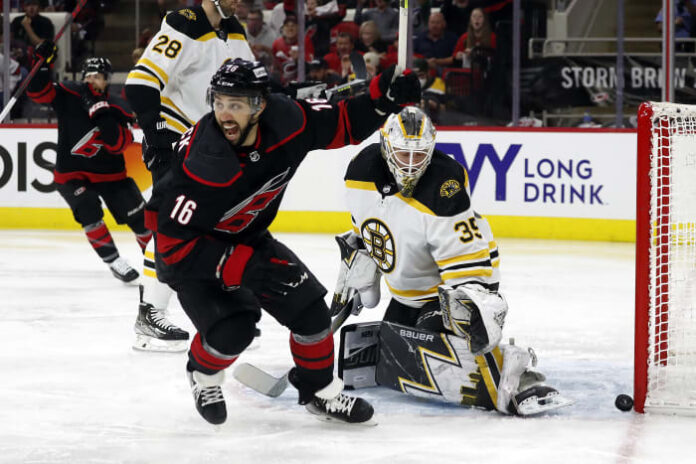 RALEIGH, N.C. – Sebastian Aho and Nino Niederreiter each scored twice and the Carolina Hurricanes overcame the early loss of goalie Antti Raanta to beat the Boston Bruins 5-2 on Wednesday night for a 2-0 lead in the first-round series.

Jesper Fast had the game’s first goal for Carolina in another strong offensive showing to start this series. Rookie goaltender Pyotr Kochetkov came on in relief of Raanta to finish with 29 saves.

Game 3 is Friday night in Boston.

The Hurricanes also played with a physical edge against a Boston team that has knocked them out of the playoffs twice in three postseasons. And it came in a game that quickly went from competitive to feisty and downright ornery in quick fashion — namely after Boston’s David Pastrnak knocked Raanta from the game midway through the first period when he struck the goaltender in the head with a gloved hand as he tried to skate past him.

Already down injured No. 1 goalie Frederik Andersen to start the playoffs, Carolina turned to Kochetkov as Raanta exited while bleeding from an apparent mouth injury.

Patrice Bergeron scored both of Boston’s goals, the first on a loose rebound in the second and then another on a redirection near the crease in the third. Linus Ullmark surrendered four goals for the second straight game and finished with 29 saves.

After Raanta’s exit, the teams constantly traded words and hits, along with repeatedly tussling after the whistle. There was the jarring shoulder-to-chest blast by Carolina’s Andrei Svechnikov that leveled Hampus Lindholm and left him wobbly as he was helped to the locker room late in the second.

Then there was Boston’s Brad Marchand giving a bit of a shove to Kochetkov as he tried to play a puck. The goaltender objected and gave Marchand a shove after the play, only to see Marchand immediately swing his stick and pop Kochetkov in the right arm to draw a slashing penalty.

It was part of a busy night in the box for the Bruins, who had 12 penalties for 26 minutes. The Hurricanes converted twice on on the power play, including Niederreiter’s finish at the crease on a 5-on-3 sequence for the 4-1 lead at 18:52 of the second.

Niederreiter’s second goal was an empty-netter in the final minute. Moments later, the game fittingly ended with the teams needing to be separated once more after the final horn.

Carolina got offensive production from its defensemen, led by Tony DeAngelo finishing with three assists.

Jaccob Slavin also assisted on Carolina’s first two goals, though he probably deserved another for jumping out of the way of Aho’s redirection tip that sent the puck between Slavin’s legs before beating Ullmark at 15:30 of the first.

Carolina has won all five meetings this season by a combined score of 26-4. It was 16-1 in the three regular-season meetings, and 5-1 in Game 1 here — including an empty-net score in that one, too.