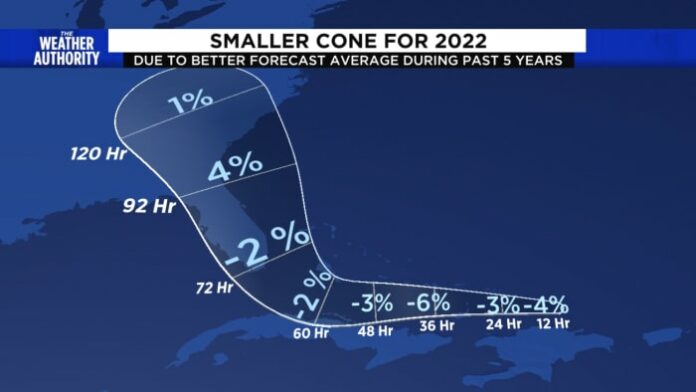 The hurricane track “cone of concern” will be refined narrower this season reflecting improved track forecast scores over recent years.

Of the 394 official forecasts issued by the National Hurricane Center during the 2021 Atlantic hurricane season, it had its best year ever predicting the position of a storm center at 48, 60, and 72 hours in 2021.  Overall track forecast errors in the Atlantic basin were close to or better than their previous 5-year average.

The National Hurricane Centers’ centerpiece of information is the most popular graphic used by the media to communicate hurricane risk to the public before a storm hits.

It goes by several names, “the cone,” “cone of uncertainty,” or the “cone of death”. Whatever you call it the cone size is based on probability.

The entire track of the tropical cyclone can be expected to remain within the cone roughly 60-70% or two-thirds of the time based on forecasts over the previous 5 years.

The cone is marked by different forecast time intervals. Forecasts farther out in time are less accurate and naturally, the cone becomes larger to accommodate historical NHC forecast errors over 5-years.

This year the cone will be up to 6% smaller in the 12 to 96-hour time intervals, but slightly larger than last year at 120 hours.

While a tighter cone means fewer people would be included in the potential path of a storm at a given forecast time period Don’t be fooled into interpreting the cone width cone relating to the storm impacts. It has no bearing on the storm’s strength or size it just helps in anticipating the uncertainty in the storm’s center position over the next 5 days.