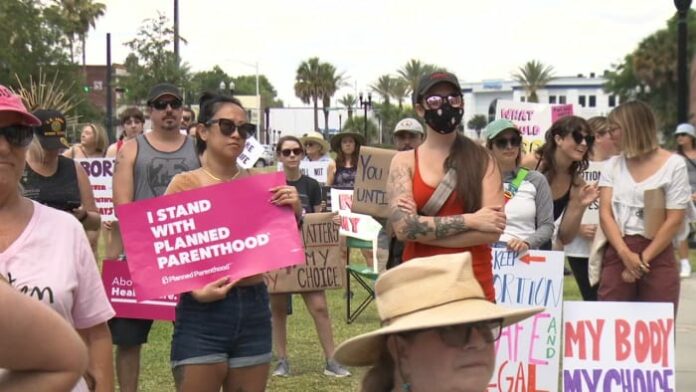 Ash Ballinger shared her story about choosing to have an abortion when she was 24 after getting pregnant with a man she dated not long after she left an abusive marriage.

“Our birth control had failed. We were using condoms and I was on birth control. The person that got me pregnant did not want a child at all. He was like we need to nip it in my bud. It’s going to ruin my life. So I didn’t really have a say,” said Ballinger. “There were two options. Either me have the child and raise the child. Me living in poverty, not able to afford groceries. Not sure how I would ever be able to afford a child. Or the other option was put that child up for adoption with the other 4,000 children that are in the foster care system today. I didn’t think either of those options were fair to the child.”

Ballinger and fellow demonstrators are fighting against the suggestion that the U.S. Supreme Court could overturn Roe v. Wade, the landmark Supreme Court decision that ruled the Constitution protects a woman’s right to have an abortion.

This comes after a draft opinion was leaked earlier this month.

“It’s infuriating. I’m very angry about it, but I want to channel that anger into the polls. It affects people in rural communities, poor communities, Black women, Hispanic women. It’s going to harm them more than anyone else,” said Women’s March Jacksonville President Kanesha Fuller.

If overturned, the issue of abortion rights would be returned to the states, like it was before 1973. In Florida, Gov. Ron DeSantis recently signed a 15-week abortion ban into law.

Many anti-abortion advocates saw that law as a victory. Vicky Dilone has participated in several peaceful March for Life protests and said her passion came after seeing a relative face trauma from receiving an abortion.

“I am very happy to hear that we might be overturning Roe v. Wade. I think that it is very unconstitutional,” Dilone said. “I saw that it still affected (my relative) many years later, and it was something she was ashamed to say. I feel like the real war on women is abortion.”

Those opposed to abortion were not seen counter-protesting on Saturday, but local politicians like Florida Rep. Angela Nixon and Florida Rep. Tracie Davis, both Democrats, were at the rally.

The decision regarding the fate of Roe v. Wade is expected in late June or early July.