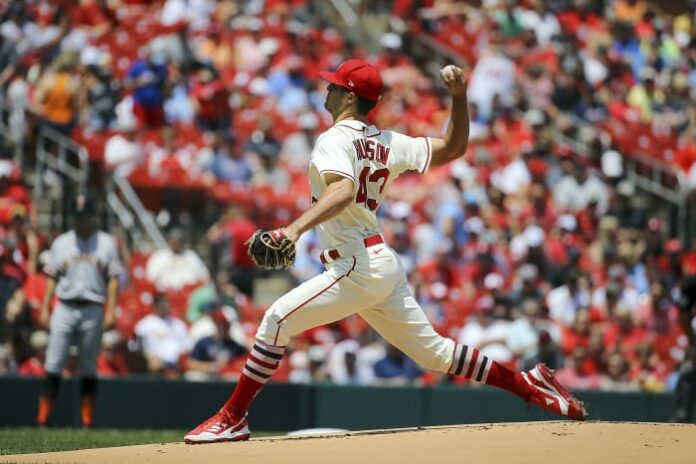 The Cardinals pitched their sixth shutout of the season. The Los Angeles Angels began the day with a major league-leading seven shutouts.

Yadier Molina doubled, singled and scored a run. He opened the second with a double off the top of the right-center field wall for his 2,128th career hit, moving him past Mike Piazza for sixth most among catchers.

St. Louis led 1-0 in the fifth when the Giants put runners at first and third with two outs. Molina threw out Joc Pederson trying to steal second to end the inning.

Tommy Edman homered as the Cardinals won for the second time in seven games. St. Louis has homered in 10 straight games.

Helsley took over for Pallante with the bases loaded and one out in the seventh. He got Brandon Belt to ground into a double play to protect a 2-0 lead.

Helsley, who made his first appearance since May 6, has thrown 15 2/3 consecutive scoreless innings dating to last Aug. 7.

Jakob Junis (1-1) allowed two runs on six hits and struck out three in 5 2/3 innings in his second start of the season. San Francisco has lost nine of its last 12 games in St. Louis.

Edman’s fourth home run of the season in the fifth gave the Cardinals home runs in a season-best 10 straight games.

GIANTS ON THE MOVE

San Francisco traded utilityman Mauricio Dubón to Houston for minor league catcher Michael Papierski, who will report to Triple-A Sacramento. The Giants recalled infielder Donovan Walton from Sacramento prior to the game. Walton, who was acquired from Seattle on Wednesday, started at second base and hit a double in the seventh inning.

Giants: INF Tommy La Stella (right Achilles inflammation) went 2 for 5 with a grand slam with Triple-A Sacramento in the seventh game of his rehab assignment.

The Cardinals will activate RHP Adam Wainwright (3-3, 3.18 ERA) off the COVID-19 injured list to start Sunday night in the final game of the three-game series. The Giants will start LHP Carlos Rodón (4-1, 1.80 ERA) who is 1-2 with a 4.15 ERA in three career starts against St. Louis.