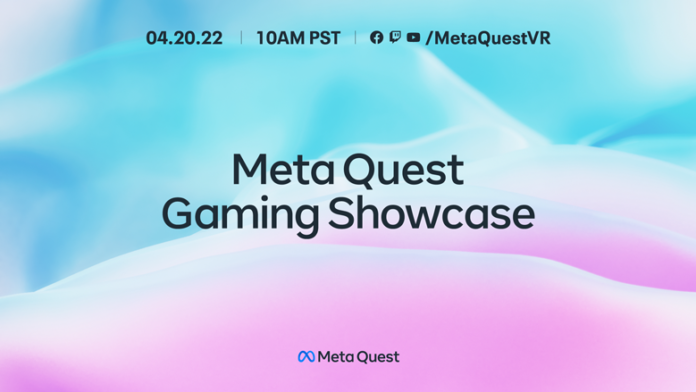 The Meta Quest Gaming Showcase is happening this week, and fans can expect a barrage of new VR game details to be revealed.

Here’s how you can watch the Meta Quest Gaming showcase as it happens, as well as a few predictions for what we believe Meta will show off at the event. But if you miss the showcase , don’t worry: We’ll be here to let you know about all the announcements so you can get caught up on all the new Quest 2 games.

If you want to tune into the Meta Quest Gaming Showcase, head to either Meta’s Twitch or Meta’s YouTube channel for live updates and trailers for whatever the company has to show off.

Don’t worry if you miss it though, the VOD will likely be available to watch after it wraps up (you can still watch last year’s showcase on Twitch) and we’ll also be here to cover all of the announcements as they happen.

Three things to look out for

We don’t know what Meta will show off, but Inner Sloth’s Twitter account has confirmed it will tell us something about Among Us VR at this week’s Meta Showcase.

Another trailer seems likely, and we’ll hopefully get a better look at how Among Us has been translated into VR by Schell Games and Robot Teddy. It could even give us a release date, but we’ll just have to wait and see.

Updates to your favorite games

These events don’t just showcase new, unannounced projects, they also give us a glimpse at updates to games we are already playing or that are hotly anticipated.
Updates for VR stalwarts like Pistol Whip and Beat Saber could be in the cards, and we might also get an update on how GTA San Andreas VR development is progressing.

One of our favorite VR games, Walkabout Mini Golf, has announced several new courses recently – including collaborations with the game Myst and the classic film Labyrinth. Perhaps we’ll get a glimpse at yet another course that’s headed to the title soon?

Lastly, there’s a chance we could see an Oculus Quest 2 Pro, or that the Project Cambria headset could be shown off at this event. There’s quite a bit of evidence that Meta will release some new hardware in 2022, but it’s not yet confirmed exactly what we’ll be getting.

This showcase could be one of the best times to announce new hardware, especially if Meta also plans to highlight massive new games like GTA San Andreas VR. Fans who are eagerly awaiting those titles could easily be convinced to splash out on a new headset in order to enjoy them to their fullest.