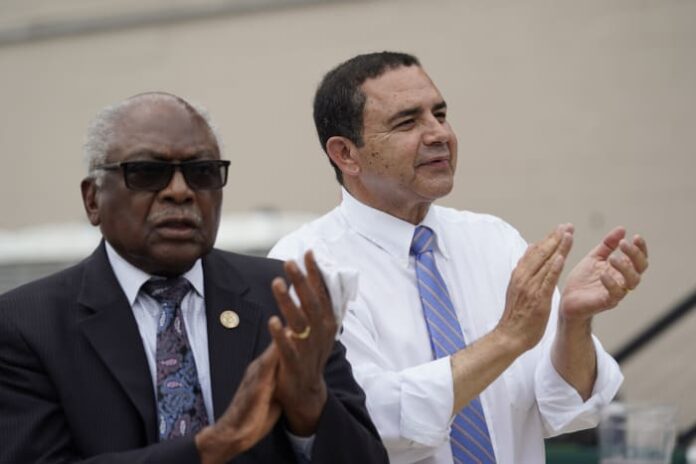 SAN ANTONIO – Just a day after Democrats forcefully recommitted to protecting abortion rights, a U.S. House leader swooped into Texas on Wednesday to defend and stand side-by-side with Rep. Henry Cuellar, one of the last anti-abortion Democrats in Congress.

The small campaign rally in San Antonio, where Cuellar is in the toughest reelection fight of his 17 years in office, put on full display the awkward timing of House leadership showing unwavering support for an abortion opponent as the party simultaneously rages over a leaked draft of a U.S. Supreme Court opinion that would overturn the landmark Roe v. Wade decision from 1973 that legalized abortion.

U.S. Rep. Jim Clyburn, the third-ranking Democratic leader in the House, rejected that his campaigning for Cuellar undercuts the urgency of the the party’s election-year promises to defend the constitutional right to an abortion.

“I would ask anybody, which is more important: to have a pro-life Democrat or an anti-abortion Republican?” Clyburn said. “Because come November, that could very well be the choice in this district.”

But making it on the November ballot is far from a guarantee for Cuellar. He must first get past a May 24 primary runoff against Jessica Cisneros, an immigration lawyer who supports abortion rights, and who finished roughly 1,000 votes behind Cuellar in March, when neither candidate met the majority threshold to win outright.

Cisneros called on House leaders to drop their backing of Cuellar in the heavily Hispanic district that runs to the U.S.-Mexico border.

“The stakes are high. They’re absolutely high,” Cisneros said in an interview this week with The Associated Press. “South Texans deserve a champion for their rights and freedom.”

House Speaker Nancy Pelosi, D-Calif., has also previously affirmed her support for Cuellar, an endorsement that Cuellar played up in front of his supporters.

Cuellar said the draft opinion goes too far and that there must be exceptions in cases of rape, incest and dangers to the life of the mother. He waved off whether the leak surfacing just weeks before the runoff would impact the outcome.

“There’s always issues that come up,” Cuellar said. “Every time you have an election there’s always things that happen. You just go with your position and move on.”

Cuellar’s campaign had announced the rally with Clyburn before Politico published the leaked draft late Monday. It is one of the congressman’s biggest events during his campaign since FBI agents searched his home in January as part of an investigation related to the former Soviet Republic of Azerbaijan. Cuellar has denied wrongdoing, and his lawyer said last month that federal authorities told them Cuellar is not the target of an investigation.

The draft Supreme Court opinion on abortion was written in February, and the language could change before the court issues its final ruling. As written, it would give states the power to decide the legality of abortion. In Texas, that would mean an outright ban that would take effect almost immediately.

Cuellar was the only House Democrat last year to vote against the Women’s Health Protection Act, which sought to bolster access to abortion. It was just one more example of how Cuellar’s centrist record has sometimes put him more aligned with Republicans, including with his support for gun rights and his criticism of President Joe Biden’s handling of the border.

Back in March, despite months of outrage by Democrats over Texas’ restrictive new ban on abortions after roughly six weeks of pregnancy, abortion had largely receded from the spotlight in the state heading into the first round of voting between Cuellar and Cisneros.

“We think this is going to be very motivating,” she said. “People are very angry.”