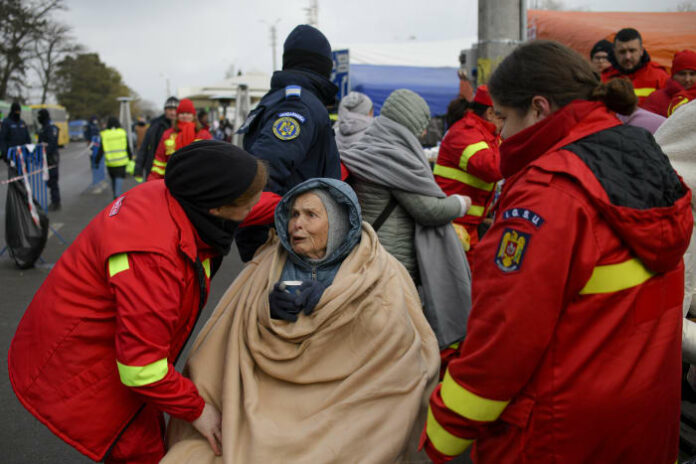 CLUJ-NAPOCA – Expectant mother Galina Kubiak says she misses her home in Ukraine but has fallen in love with Romania, the neighboring country where she fled with her two small children to escape the war.

“Sometimes we go to the store, and they find out we’re Ukrainians and people give the kids milk or cookies, or sometimes they just give hugs,” the 35-year-old who now lives in Romania’s northern city of Cluj-Napoca said Friday. “I’m so surprised in a good way (by) the kindness of people.”

Since Russia invaded on Feb. 24, more than 6 million people have fled Ukraine, the United Nations refugee agency announced Thursday. Russia’s war — which it insists on calling a “special military operation” — has prompted one of the worst humanitarian crises in Europe since World War II.

Poland has absorbed the majority of refugees — more than 3.2 million — while more than 900,000 went to Romania. Many others have fled to other neighboring countries like Hungary, Slovakia, and Moldova.

Like many of the millions of refugees, mostly women and children, who have fled the war, Kubiak’s journey so far has been a mixture of hope and horror. Her family hails from a village just a few kilometers from Bucha outside Kyiv, the now-infamous site of alleged war crimes by Russian forces.

“My brother was helping to bury people,” she told The Associated Press. “People were dead on the streets and people were just taking them and making holes in the ground and burying people — it’s hard to see, it’s very hard to see.”

Vlad Gheorghe, a Romanian member of the European Parliament who runs a Facebook group in Romania called United for Ukraine that pools resources for refugees, says refugees’ needs have shifted since the start of the crisis. They now require permanent solutions for employment, schooling, and healthcare.

“We were not prepared for this type of crisis in the EU — and we should have been,” he told the AP in an email Friday. “Also, there is a continuous need for financial support and donations for food, hygiene products (and) clothing.”

“The refugee crisis does not end even if peace comes right now,” he said, adding that many refugees won’t have a home to return to due to the destruction of war, but that he has been impressed with the continued level of support from civic society throughout the crisis.

Others on the frontline of refugee support, however, say the situation is taking a toll.

“We love what we do, but obviously tiredness is creeping in,” said Laura Mihali, who leads the Christian nongovernmental organization Youth For Mission, which provides housing and food for Ukrainian refugees — including Kubiak — in Cluj-Napoca.

“Three weeks ago we found out that one of the families is from Bucha, their son-in-law was killed and is buried in one of the big holes there in the city,” she said. “I think the psychological tiredness is affecting us more than the physical.”

Information technology worker Uliana Kaliuzhna, from Ukraine’s northeast city of Kharkiv, says she feels lucky that she can continue her work online in Cluj-Napoca, and continues to pay tax at home “to support my country.”

Kaliuzhna rents her flat with the salary that she still draws.

“It’s not easy to pay for everything,” she said. “But volunteer centers help a lot with food and clothes — sometimes we visit them and get help.”

The UNHCR also said Thursday that more than 1.6 million refugees have returned to Ukraine, either permanently or temporarily. But it added that cross-border movements might not indicate “sustainable” returns.

Kubiak, who is heavily pregnant, stresses that she wants to return home when the war is over and reunite with her loved ones.

“We all have a dream that we can all come back and live in peace and help rebuild,” she says, her voice quivering with emotion, “and renew our country.”