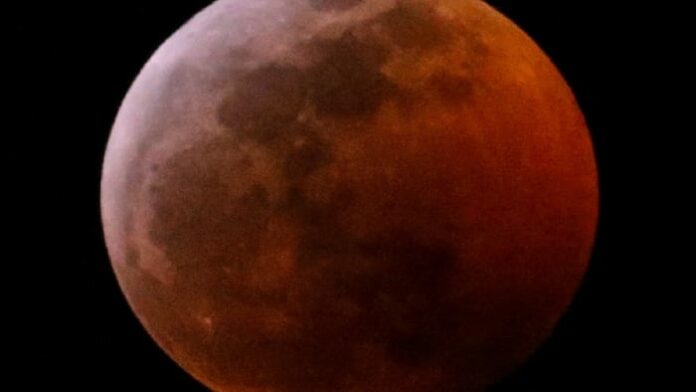 A lunar eclipse occurs when the moon moves into Earth’s shadow. During a total lunar eclipse, the moon appears to turn “blood red” as it gets deeper into the shadow. This happens when sunlight passes through particles in Earth’s atmosphere and become scattered, which is also what gives sunsets their color.

Because red and and orange have longer-than-average wavelengths on the color spectrum, they tend to pass through the atmosphere rather than scatter away. That color is then refracted onto the moon’s surface.

The first of two total lunar eclipses gets underway late Sun. May 15. Totality, when the moon appears blood red, will begin at 11:29 p.m. and will last until 12:53 a.m the next morning.

The partial eclipse, when there appears to be a bite taken out of the moon, gets underway an hour earlier at 10:27. The full eclipse ends at 1:55 a.m.

The second total lunar eclipse of the year happens in November before sunrise. This too will last for a long time, getting started at 4:09 a.m. and ending as the moon sets just before 7 a.m. The rest of the eclipse will happen below the horizon, not visible in Central Florida.

You do not need special glasses to see a lunar eclipses. The next solar eclipse visible in Florida will be on April 8 of 2024. You must wear special eclipse glasses to view a solar eclipse. That eclipse will be partial from Central Florida’s point of view!