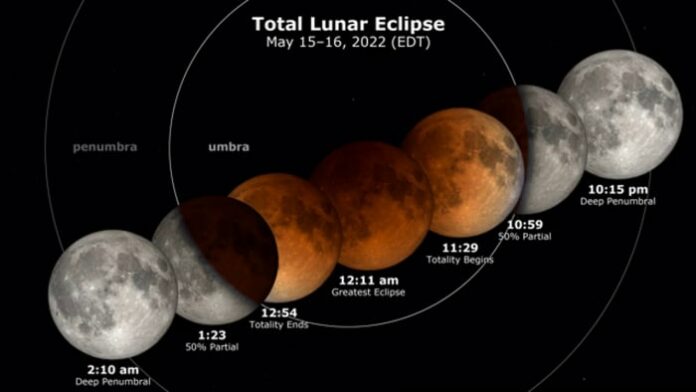 ORLANDO, Fla. – The moon, Earth, and sun are putting on a show tonight with the first total lunar eclipse visible from Florida in more than two years.

Derek Demeter is the director of the Emil Buehler Planetarium at Seminole State College. He said there are certain times during the year when the alignment of the sun, Earth and moon are on the same plane.

“During a full moon, when the moon is on the complete opposite side of the sun in relationship to the Earth, the moon enters the Earth’s shadow that was casted by the sunlight behind it and we get to witness that tonight,” Demeter said.

Demeter said the moon should start passing through the Earth’s shadow around 10:20 p.m. on Sunday. It will start to darken, creating a partial eclipse. As the moon gets deeper in the shadow, it will appear to turn a “blood red” color.

In other words, the red color you’ll see on the moon will be light from all of Earth’s sunrises and sunsets, at least at that time, hitting the lunar surface.

Demeter said it will be a total eclipse around 11:30 p.m. The moon will then start moving out of the Earth’s shadow with the whole show ending around 2 a.m. on Monday.

Moon watchers can go outside and see the eclipse from anywhere in Central Florida, but Demeter said cloud cover could impact your views.

“I’m hoping for breaks in the clouds where we have a few minutes of clear, maybe you might have a lot of thick clouds and there might be a few areas where it opens up,” he said. “Wait for that opportunity, go out there and look.”

The Emil Buehler Planetarium is hosting a livestream of the lunar eclipse. Click here for more information on the virtual watch party.