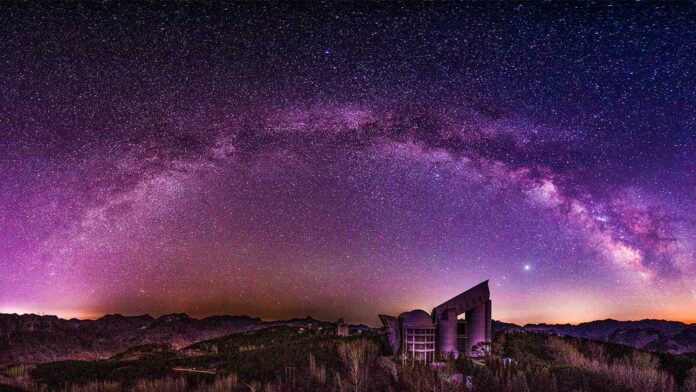 Our galaxy formed its original disk 2 billion years before its stellar halo.

A new analysis of nearly a quarter million stars puts firm ages on the most momentous pages from our galaxy’s life story.

Far grander than most of its neighbors, the Milky Way arose long ago, as lesser galaxies smashed together. Its thick disk — a pancake-shaped population of old stars — originated remarkably soon after the Big Bang and well before most of the stellar halo that envelops the galaxy’s disk, astronomers report March 23 in Nature.

“We are now able to provide a very clear timeline of what happened in the earliest time of our Milky Way,” says astronomer Maosheng Xiang.

He and Hans-Walter Rix, both at the Max Planck Institute for Astronomy in Heidelberg, Germany, studied almost 250,000 subgiants — stars that are growing larger and cooler after using up the hydrogen fuel at their centers. The temperatures and luminosities of these stars reveal their ages, letting the researchers track how different epochs in galactic history spawned stars with different chemical compositions and orbits around the Milky Way’s center.

“There’s just an incredible amount of information here,” says Rosemary Wyse, an astrophysicist at Johns Hopkins University who was not involved with the study. “We really want to understand how our galaxy came to be the way it is,” she says. “When were the chemical elements of which we are made created?”

Xiang and Rix discovered that the Milky Way’s thick disk got its start about 13 billion years ago. That’s just 800 million years after the universe’s birth. The thick disk, which measures 6,000 light-years from top to bottom in the sun’s vicinity, kept forming stars for a long time, until about 8 billion years ago.

During this period, the thick disk’s iron content shot up 30-fold as exploding stars enriched its star-forming gas, the team found. At the dawn of the thick disk era, a newborn star had only a tenth as much iron, relative to hydrogen, as the sun; by the end, 5 billion years later, a thick disk star was three times richer in iron than the sun.

Xiang and Rix also found a tight relation between a thick disk star’s age and iron content. This means gas was thoroughly mixed throughout the thick disk: As time went on, newborn stars inherited steadily higher amounts of iron, no matter whether the stars formed close to or far from the galactic center.

But that’s not all that was happening. As other researchers reported in 2018, another galaxy once hit our own, giving the Milky Way most of the stars in its halo, which engulfs the disk (SN: 11/1/18). Halo stars have little iron.

The new work revises the date of this great galactic encounter: “We found that the merger happened 11 billion years ago,” Xiang says, a billion years earlier than thought. As the intruder’s gas crashed into the Milky Way’s gas, it triggered the creation of so many new stars that our galaxy’s star formation rate reached a record high 11 billion years ago.

The merger also splashed some thick disk stars up into the halo, which Xiang and Rix identified from the stars’ higher iron abundances. These “splash” stars, the researchers found, are at least 11 billion years old, confirming the date of the merger.

The thick disk ran out of gas 8 billion years ago and stopped making stars. Fresh gas around the Milky Way then settled into a thinner disk, which has given birth to stars ever since — including the 4.6-billion-year-old sun and most of its stellar neighbors. The thin disk is about 2,000 light-years thick in our part of the galaxy.

“The Milky Way has been quite quiet for the last 8 billion years,” Xiang says, experiencing no further encounters with big galaxies. That makes it different from most of its peers.

If the thick disk really existed 13 billion years ago, Xiang says, then the new James Webb Space Telescope (SN: 1/24/22) may discern similar disks in galaxies 13 billion light-years from Earth — portraits of the Milky Way as a young galaxy.