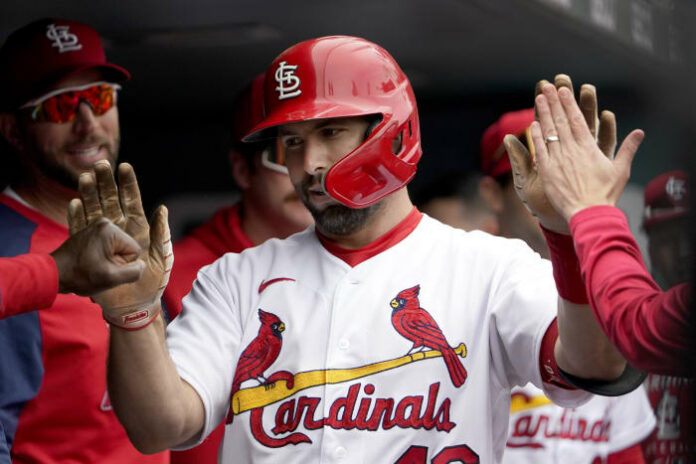 ST. LOUIS – Paul Goldschmidt hit an early home run and Steven Matz and the St. Louis bullpen made it stand up, leading the Cardinals over the Kansas City Royals 1-0 Monday.

Goldschmidt, who got his first day off of the season Sunday, connected with one out in the first inning against Zack Greinke.

The Royals lost their fourth in a row overall, and have dropped 21 of their last 28 to St. Louis dating to Aug. 7, 2017. This game was a makeup from a rainout on April 13 — the I-70 interleague series continues Tuesday and Wednesday in Kansas City.

Matz (3-1) scattered four hits, including a pair of doubles, in six innings. He walked none, hit a batter and struck out four.

Matz had allowed five runs over his previous three starts, spanning 14 2/3 innings, after yielding seven in his Cardinals debut on April 10.

St. Louis relievers Kodi Whitley, Nick Wittgren and Giovanny Gallegos were equally sharp, each pitching an inning in the combined five-hitter. Gallegos gave up a two-out single in the ninth but picked up his fifth save in six chances.

Greinke (0-2) gave up three hits in six innings. The 18-year big league veteran made the 493rd start of his career and didn’t walk anyone with one strikeout.

Carlos Santana had two of the Royals’ five hits. The Cardinals managed just four hits in the game.

Of the 18 players who got an at-bat in his game, half of them — nine — now have a batting average of .196 or lower this season. The Cardinals and Royals combined for 12 strikeouts and one walk.

Major League Baseball hitters finished April with a paltry .231 batting average, on pace to fall below the record low of .237 in 1968 when Cardinals great Bob Gibson and other pitchers dominated.

Since interleague play began in 1997, the Cardinals’ 61.017 winning percentage (72-46) against the Royals is the best across MLB among interleague natural rivals.

Royals CF Michael Taylor robbed Andrew Knizer of a home run in the fifth when he caught the ball over the wall in right center and pulled it back in, drawing applause from the crowd for his feat. … In the sixth, Gold Glove LF Tyler O’Neill dove and snagged a line drive by the Royals’ Whit Merrifield just before it hit the grass.

Merrifield played in his 490th consecutive game, which will extend his franchise record and continue the longest streak in the majors.

Cardinals: LHP Packy Naughton has been optioned to the Triple-A Memphis. Naugthon, a rookie, appeared in one game following his recall on April 22. RHP Aaron Brooks has been designated for assignment. Brooks has appeared in five games, totaling 9 1/3 innings pitched in relief.

Royals: C Cam Gallagher (left hamstring strain) placed on 10-day IL. Gallagher got hurt as ran out a single in the third inning in Sunday’s game against the Yankees. The Royals had to pinch-run for him. An MRI showed a Grade 2 hamstring strain. He will be out for an undetermined amount of time.

Cardinals: INF Tommy Edman (aggravated hip flexor) didn’t play. He left Sunday’s game against Arizona in the seventh inning. He said after the game Sunday that neither he nor the St. Louis medical staff believe the injury is serious. … RHP Drew VerHagen (right hip) is scheduled to have a rehab assignment Tuesday in Triple-A Memphis.

Royals: RHP Brad Keller (0-2, 2.19) did not factor into the decision of Kansas City’s 5-2 win in 10 innings last Thursday in Chicago, in which he allowed one run on three hits and no walks in seven innings. He has lost four straight starts to the Cardinals.

Cardinals: Dakota Hudson (2-1, 2.75) earned his second straight win in as many starts. In his last outing against Arizona, he carried a no-hit bid into the sixth inning. … The Cardinals have won all four games Hudson has appeared in his career against Kansas City.