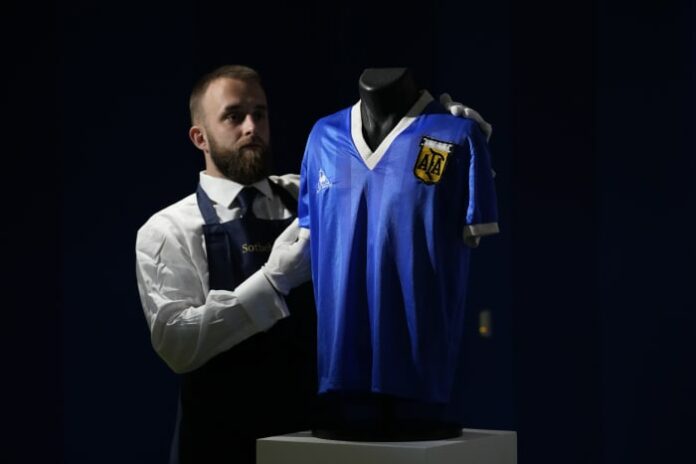 LONDON – The shirt worn by Diego Maradona when he scored the controversial “Hand of God” goal against England in the 1986 World Cup has sold for 7.1 million pounds ($9.3 million), the highest price ever paid at auction for a piece of sports memorabilia.

Auctioneer Sotheby’s sold the shirt in an online auction that closed Wednesday. It did not identify the buyer.

Maradona scored two goals during the quarter-final game in Mexico City on June 22, 1986, just four years after Britain and Argentina had fought a war over the Falkland Islands. The Argentine great’s first goal was ruled a header, but the ball had bounced off Maradona’s fist, out of sight of the referee.

Maradona’s second goal saw him dribble the ball past almost the entire English team before beating goalkeeper Peter Shilton. In 2002, it was voted “goal of the century” in a FIFA poll.

Argentina won the game 2-1 and went on to win the World Cup.

After the game Maradona swapped shirts with England midfielder Steve Hodge, who loaned it long-term to England’s National Football Museum in Manchester before putting it up for sale.

Maradona, considered by many to be the greatest player of all time, struggled with cocaine abuse and other excesses and died in November 2020 at age 60.

After Sotheby’s announced the coming sale last month, relatives of Maradona expressed doubt the blue No. 10 jersey was the shirt the soccer star had worn in the second half of the game, when he scored both goals. The auction house said the shirt’s identify was confirmed by sports memorabilia photo-matching firm Resolution Photomatching and confirmed by Sotheby’s chief science officer.

The sale prices include an auction house charge known as the buyer’s premium.