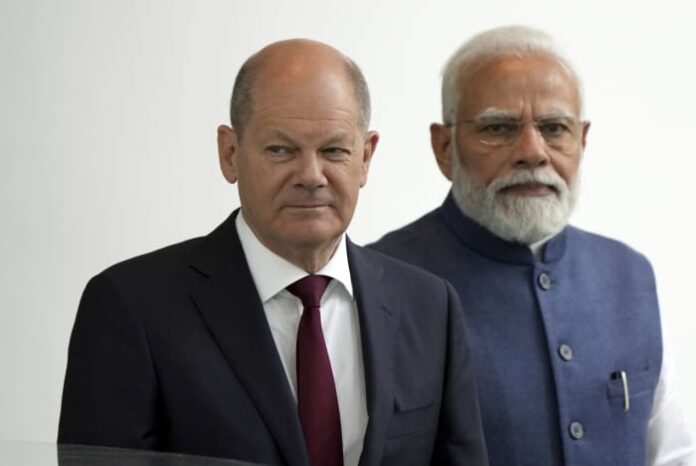 German Chancellor Olaf Scholz, left, Indian Prime Minister Narendra Modi, right, and various members of the cabinets of both countries arrive for a family photo as part of a meeting at the chancellery in Berlin, Germany, Monday, May 2, 2022. (AP Photo/Michael Sohn)

BERLIN – Germany and India signed a series of bilateral agreements Monday focused on sustainable development that will see the South Asian nation receive 10 billion euros ($10.5 billion) in aid by 2030 to boost the use of clean energy.

The accords were signed during a visit to Berlin by India’s Prime Minister, Narendra Modi. Germany Chancellor Olaf Scholz is seeking to elicit India’s support for the tough stance taken by Europe and the United States toward Russia over the war in Ukraine.

Modi reiterated his call to both Russia and Ukraine to end the fighting, saying: “We believe that no party can emerge victorious in this war.”

But unlike Scholz, Modi refrained from any overt criticism of Moscow, which has previously praised India for its “neutral” stance on the conflict.

Reporters were not permitted to ask questions after the two leaders spoke – an unusual arrangement at German chancellery where at least four questions are routinely taken. The decision was taken at the insistence of the Indian delegation, said a German official, who spoke on condition of anonymity because of the sensitivity of the issue.

The agreements covered issues ranging from technical assistance to increase the use of renewable energy and hydrogen, to reducing greenhouse gas emissions, protecting biodiversity and improving agricultural land use. Other areas of cooperation center on migration, nuclear research and the establishment of secure communications channels between the two governments.

Scholz also invited India, Indonesia, Senegal and South Africa to attend the meeting of the Group of Seven major industrialized economies in Germany at the end of June.