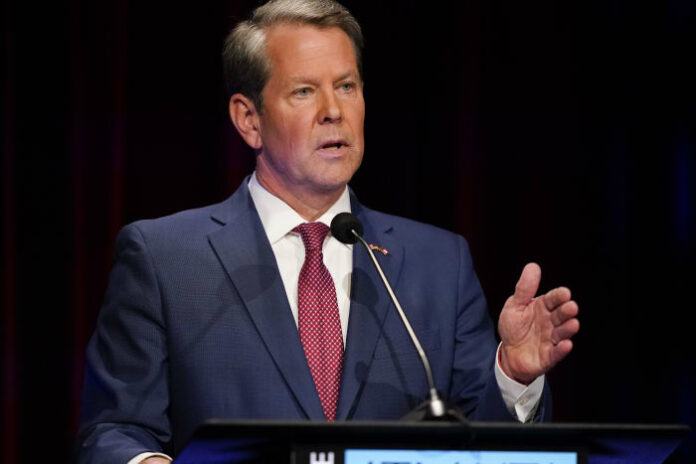 “We have prioritized education, public safety and healthcare, even when we faced truly unprecedented times,” Kemp said.

The budget beginning July 1 continues $5,000-a-year pay raises that began in April for state and university employees and turns a $2,000 bonus K-12 teachers are getting this year into a pay raise. It also continues boosts in K-12 formula spending and provides enough money to the state’s public universities that they have pledged to roll back certain fees added during the Great Recession, cutting student costs.

More than $1 billion in new money would flow to education next year compared to this year’s original budget, part of a 10.8% overall increase in spending.

The budget includes more funding for programs that help people with disabilities avoid being sent to a nursing home. The state normally adds about 100 slots each year to the program, which advocates say has a waiting list around 7,000 people. The $10.3 million boost would finance 513 new slots, which Tillery has said said is the maximum amount of new slots that could be created right now by disability support providers.

The state will spend $180 million more overall on its main mental health agency, the Department of Behavioral Health and Developmental Disabilities, part of a broader mental health overhaul. Besides the aid for home and community care, there would be a 1% reimbursement boost for intellectual and developmental disability providers, plus more than $13 million to provide additional raises, beyond the $5,000 state pay boost, for nurses and other other employees at state psychiatric hospitals. There’s also money to open new psychiatric beds and $2.2 million to expand a program of mandatory assisted outpatient treatment.

“With this budget, we’re further ensuring that Georgia remains a state that values life at all stages by putting over 28 million dollars toward extending Medicaid coverage of new mothers from six to twelve months following birth, and increasing the provider rate for foster parents, child caring institutions, child placing agencies, and relative caregivers by 10 percent,” Kemp said.

The budget also includes a burst of spending on public safety, increasing salaries for prosecutors and public defenders and spending more on the state’s crime lab and medical examiner. A Senate plan to condition much of the increased spending on medical examiners to the Georgia Bureau of Investigation reopening a lab in Macon was scaled back, but remains at a lower level. The budget also includes $579,000 for four GBI employees to investigate election fraud.

There will be additional $2,000 pay boosts for guards in prisons and juvenile justice facilities, additional pay boost for nurses and others workers at mental hospitals, plus an additional $4 million to boost guard salaries at private prisons that hold Georgia inmates. The state would also spend $10 million on prison technology programs, including trying to find or jam illicit cellphones.

Beyond raises, there’s also more than $100 million to back Kemp’s plan to raise the 401K retirement match for state employees from 3% to 9% and to pay employees for unused leave when they retire.

In higher education, $10 million will be shifted to fund college completion grants for students close to graduation with unmet financial need. But there will be big changes in another college aid program called tuition equalization grants. Now, every Georgia resident who attends a private college is eligible for $850 a year. The budget boosts that amount to $900 a year for current students, letting them continue on the current program.